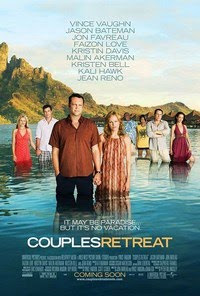 In the film, Couples Retreat, four Midwestern couples embark on a journey to a tropical island resort, where one of the couples will work on a failing marriage. What starts out looking like a typical, Vince Vaughn snarky/slob comedy turns into an awkward comedy about the marriage blues. This movie not too subtly says that the work and effort that it takes to keep a marriage intact are themselves a reward.

Dave (Vince Vaughn) and Ronnie (Malin Akerman) are a happy couple with two adorable children, but they don’t seem to notice that they’ve stopped doing things together that they enjoy. Their friends, Jason (Jason Bateman) and Cynthia (Kristen Bell), are having problems. Jason talks Dave and Ronnie and two other couples: Joey (Jon Favreau) and Lucy (Kristin Davis) and Shane (Faizon Love) and his 20-year-old girlfriend, Trudy (Kali Hawk), to travel to Eden West, a resort that promises to help couples fix marriage problems.

While Cynthia and Jason are there to work on their marriage, the other three set out to ride jet skis, get spa treatments, have fun in the sun, and generally enjoy some down time. However, they are informed that participation in the resort’s couples therapy program, led by the wise Marcel (Jean Reno), is not optional. Much to their chagrin, they find that their group-rate vacation comes at the price of examining all their marriages, and Cynthia and Jason aren’t the only couple with problems.

The funny moments that appeared in commercials for Couples Retreat practically comprises most of what can be described as the film’s belly laughs. There are certainly many other laughs, but that comedy and humor is derived from this movie’s central truth: all couples have problems. This movie is not about juvenile laughs. It is actually a grown up comedy about the complications of adult life. As depicted in this film, even the most painful moments in a marriage can illicit laughs because genuine, meaningful comedy can come from truths. The script allows the characters to confront each other with painful truths that might be uncomfortable to hear in the real world, but are funny when said in the context of this movie.

Under the uneven direction of Peter Billingsley, Couples Retreat drifts and stumbles, as if Billingsley can’t quite get a grip on what the soul of this narrative is. Too many moments that are meant to be thoughtful or introspective end up being graceless. However, the sharp observational and relationship comedy by screenwriters, Jon Favreau, Vince Vaughn, and Dana Fox combined with some quality comic acting make Couples Retreat an enjoyable film. Faizon Love and Kali Hawk, whose characters were likely meant to be mere Negro comic relief, actually steal the show, and the underrated Love gives, by far, the best performance in Couples Retreat.