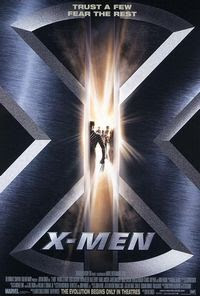 ) is a young mutant, born with a genetic gift/curse that gives her special powers and abilities that normal humans don’t have. Her gift/curse is the ability to absorb the memories of another person, and in the case of another mutant, absorb that mutant’s power merely by touching her bare skin against his skin. If she isn’t careful and touches a person for too long, she could send him into catatonic shock, which she does to the first boy she kisses. On the run in Canada, she meets Wolverine (Hugh Jackman), himself a mutant. He grudgingly takes her under his wing. After an evil mutant named Sabertooth (Tyler Mane) attacks them, the X-Men: Cyclops (James Marsden), Jean Grey (Famke Janssen), and Storm (Halle Berry) rescue the duo and take them to their secluded School for Gifted Youngsters where Wolverine and Rogue meet the school’s headmaster Professor Charles Xavier or Professor X.

Prof. X and his X-Men are at odds with Magneto (Ian McKellen) and his so-called evil mutants who want to subjugate mankind, whereas the X-Men work to show humanity that normal humans and mutants can live together in harmony. However, Magneto is after one of the new mutants to use that mutant’s power in a hideous scheme to destroy humanity. Meanwhile, malcontent humans hound Xavier and his students as they fight to protect humans, both from their own racial hate and from Magneto and the gang.

X-Men isn’t a great movie, but it’s very good. I, like many comic book fans, expected so little that when we got only a little more, was ecstatic. For years, film projects based, like X-Men

, on other Marvel Comics properties were disasters, and the rumors weren’t promising much more for the X-movie. It’s a decent sci-fi, action film with some good fight sequences, a few good characters, and a fairly decent pace. It does drag at times, but for the most part, the writers and the director manage to keep our interest in the concept piqued.

The costumes, inspired by the leather/vinyl of The Matrix

(which inspires much of this film), and the sets are excellent. The color palette leans toward blacks, shadowy and cool grays, and lots of brown; it’s a dreary and downbeat world in which the mutants live.

The casting is good, although, as a long time X-geek, I don’t agree with all the choices to play my favorite mutants. I usually like Halle Berry, but she is wrong as Storm, and James Marsden and Famke Janssen don’t cut it as Scott “Cyclops” Summers and Jean Grey either, but despite these reservations, the film is good.

I do wish the filmmakers had given credit to the comic book creators whose work provided the characters and story for this movie: Stan Lee, Jack Kirby, Len Wein, Dave Cockrum, Chris Claremont, and John Byrne, but comic book publishers have a history of avoiding even the smallest act of acknowledgement of the men who’ve created these brilliant four color inventions.

is still a good film. A decent action, a credible science fiction film, and a very good adaptation of a comic book that anyone who ever read The X-Men