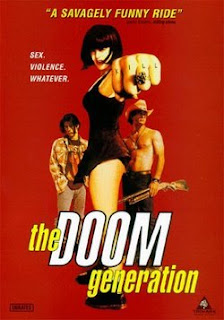 Sex, mayhem, murder, and whatever are all in ample evidence in bad boy indie director Greg Araki’s film, The Doom Generation. Controversial and bold, the film is an apocalyptic vision of a dead end generation who live for whatever makes them feel something good (usually feeling good through sex, drugs, and giving others pain) at the moment.

A teen couple, Jordan White (James Duval) and Amy Blue (Rose McGowan), picks up Xavier Red (Johnathon Schaech), an adolescent drifter with a penchant for violence and kinky (or deviant as some call it) sex. Dimwitted Jordan and crystal method addict Amy save Xavier from some skinheads who are stomping his ass. Xavier returns the favor when he saves the kooky couple from a gun-wielding, Asian convenience store clerk (Dustin Nguyen) by killing the clerk. Thus begins a hellish road trip that finds the trio dishing out remorseless brutality and freefalling into nihilism, and it all leads to a sad and shattering ending.

The film is filled with shocking images, jaw-dropping sex, and uproariously deadpan dialogue that pricks up the ears. The film, however, is mostly flat. Fictional road trips are often a sign of a story that doesn’t know where it’s going or of a writer who is stalling for time while he figures out where his story is going. Still, The Doom Generation

is bold and unflinching and is the perfect antidote for the staid, mind numbing, eye candy that the film industry churns out for the movie masses. Araki’s bold stokes and colorful decadence is a breath of fresh air even if the story is flat and the plot nonexistent. So boldness must count for something.