Review: "Pirates of the Caribbean: The Curse of the Black Pearl" is a Surprise 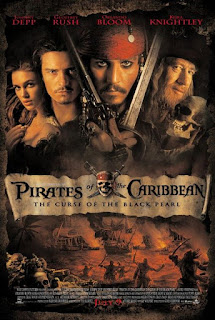 FANTASY/ACTION/ADVENTURE/HISTORICAL with elements of romance

I guess I shouldn’t be surprised that some movie critics and reviewers are stanking on Pirates of the Caribbean: The Curse of the Black Pearl mainly because the movie is loosely based on a theme park ride at Disney World. That’s beside the point; it’s not like a theme park ride is the worst thing upon which a movie could be based, especially since we’ve all lost track of how many movies have been based upon skits from “Saturday Night Live.” All that really matters is the question whether this is a fun film or not, which it is – the rousing good, old-fashioned adventure film that Sinbad: Legend of the Seven Seas tried to be. I guess I should also mention that I have an incredible weakness for pirate films, so that could color my judgment.

Will Turner (Orlando Bloom, sexy elf-warrior from the Lord of the Rings films), a talented blacksmith, joins a the pirate captain Jack Sparrow (Johnny Depp) and becomes a pirate himself to rescue the love of his life, Elizabeth Swann (Keira Knightley) from the wicked pirates of the fearsome ship, The Black Pearl. Led by their mutinous Captain Barbosa (Geoffrey Rush), the men of the Pearl are cursed and must break the ancient spell with the blood of Elizabeth.

Directed by Gore Verbinski (The Ring

), Black Pearl is an SFX-laden movie distraction that’s worth the time distracted. The plot is bare (then, again aren’t most made-to-order blockbusters thin on plot), and the story gets muddled at the end, hitting more than it’s share of sand bars. Don’t think, enjoy. High production values, costumes, great sets, wonderful backdrops and vistas, the open sea, nasty pirates, colonial military, brave sea dogs, and a bucketful of obstacles facing our heroes – it’s the makings of a movie meant for summer or holiday release. If this is eye candy, it’s a sweet dessert without the worrisome aftertaste of plot and story that stays with you.

I always say that the price of a ticket is worth the cost if you can find at least two performances worth watching. Johnny Depp’s Jack Sparrow is a campy, burlesque pirate with an over-the-top nutty flavor. Every time you think that Sparrow might become annoying, Depp, in swarthy getup, rises to the occasion with a flourish of hand gestures and twisted facial expressions that for some unearthly reason endear him to the audience again. Not to be outdone, Geoffrey Rush, a very fine actor, hams it up with same intensity that he’d give to a “serious and worthy dramatic film. He gets inside Pirates, sloshes around when he wants to be zombie suave and then turns on nasty ooze when he’s supposed to be a really, really, really bad man.

Pirates of the Caribbean might occasionally play at being a pirate film in the classic tradition of old Hollywood, but it’s true to its modern roots. It’s a get-on-and-ride attraction with all the ups-and-downs and thrill machine delivery that Disney engineering creates in theme park rides.


Posted by Leroy Douresseaux at 7:17 PM