Review: Colin Firth is Strong in "The Advocate" a.k.a. "The Hour of the Pig" 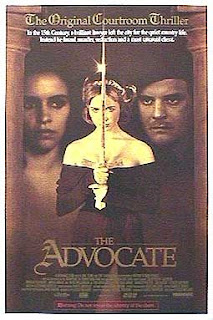 DRAMA/MYSTERY/HISTORICAL with elements of a thriller

France in the year 1452: Richard Courtois (Colin Firth), a lawyer from Paris, and his law clerk, Mathieu (Jim Carter), move to the small rural village of Abbeville, in the province of Ponthieu, where Courtois will become the public defender. He hopes to find peace in the countryside, but what he finds instead is ignorance, superstition, and fear. He is especially taken aback because some of the clients he must defend are animals (because in Middle Ages France, animals could be tried and executed for murder as the law recognized they could be possessed to do evil).

Courtois must defend a pig accused of murdering a Jewish boy. He tries to settle the case by buying the pig, but the owner, Samira (Amina Annabi), refuses the offer. Samira is an alluring Moor who travels throughout France in a caravan with her people, and she believes that the pig is innocent and shouldn’t be punished. Courtois comes to believe that the Jewish boy’s murder is part of a sinister conspiracy. Still, he is trying to solve a mystery in a town where the denizens view Courtois’ intelligence as if it were as mysterious as the witchcraft they fear so much.

The Hour of the Pig better known as The Advocate to American audiences, is probably one of the strangest coherent movies many film viewers will ever see. The history of filmmaking is full of strange, peculiar, and ultimately confounding films. There are others films that are strange because they contain ideas from the real world, either past or present, that mystify us because they are so alien either to our times and culture. The Advocate is one such film. It’s story takes place in a time in France when the power of the feudal lords was waning, and the economically powerful bourgeoisie were throwing their power behind a centralized authority, the monarchy.

Still, the feudal lord in this film, Seigneur Jehan d’Auferre, the Lord of Abbeville (wonderfully played by the always regal Nicol Williamson), wields a lot of power and also influences both the outcome of both and the lives of the film’s central players. The Seigneur recognizes that the peasants are ignorant and superstitious, but it is best to appease their fear when it comes to religious matters. Into this comes Courtois, who recognizes the law about prosecuting animals, but thinks it to be ridiculous as a practical matter. In his estimation, the local magistrate, Boniface (Michael Gough, who played Bruce Wayne’s butler Alfred in the 1989 film Batman and its three sequels), and the local prosecutor, Pincheon (Donald Pleasence), should not prosecute animals simply because they are supposed to be reasonable and enlightened men who shouldn’t do such a… dumb thing.

Courtois finds himself in the midst of a murder mystery, where the political and religious leaders of Abbeville know more than they let on. They are corrupt not only so they can maintain their power, but also because it allows them to take advantage of the villagers for both their bodies and souls. In a quiet way, this film takes a glance at how superstition and particularly fear dictate how a community lives. The Advocate is fascinating; combine that with a murder mystery and plenty of seduction (the frankness of language, innuendo, and sex will surprise some viewers who expect period dramas to be so refined) and The Advocate is a mystery thriller to rival classic Film-Noir.

Actor Colin Firth is one of the two people who hold this concept together. He plays Richard Courtois with great subtlety for a lead. Although we see this narrative largely through Courtoir’s eyes, Firth is not flashy and doesn’t try to dominate the screen. He doesn’t need to because he knows that the strange world of Middle Ages Abbeville will develop before our eyes with him as the guide, but doesn’t need to show off because of it. We attend him without Firth forcing our attention to Courtois, and Firth rewards us with a wonderful trip into the past with his character as our guide.

The other pillar is writer/director Leslie Megahey, who allows the actors to play with and embody the characters. However, the fact that Megahey created such an engaging screenplay from such an alien time (that feels so real) is the biggest achievement, and his film (whether you know it as The Hour of the Pig or The Advocate) is a fascinating story worth watching.

Posted by Leroy Douresseaux at 11:55 AM