Review: "X-Men: The Last Stand" is a Mixed Bag of Good and Bad 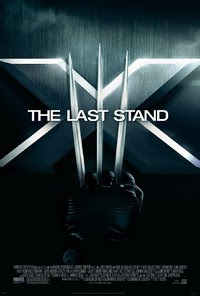 Warren Worthington III (Ben Foster) is a mutant; a pair of large, white angelic wings grows out of his back. His father, Warren Worthington II (Michael Murphy), through his pharmaceutical company, has created a “cure” for mutancy, one that will suppress the gene that makes them unique, take away their powers and make them normal humans. Worthington wants to use it on his son...

Meanwhile, the X-Men are in a state of flux. Ororo Munroe/Storm (Halle Berry) is now the X-Men’s leader, while Scott Summers/Cyclops (James Marsden) mourns the loss of the love of his life, Jean Grey (Famke Janssen), who was apparently killed in X2: X-Men United. Now, Professor Charles Xavier (Patrick Stewart), founder of the X-Men and a school for mutants on his palatial estate, wants Storm to take leadership of the X-Men. Logan/Wolverine (Hugh Jackman) finds himself caught in the middle, counseling Storm, the Professor, and a teen mutant love triangle: Rogue (Anna Paquin), Bobby Drake/Iceman (Shawn Ashmore), and Kitty Pryde (Ellen Page). With all that drama, they find the issue of Worthington’s cure brought to their doorstep when an old colleague, the blue-furred Dr. Hank McCoy/Beast (Kelsey Grammar), visits to inform the X-Men of the cure’s existence.

A “cure” for mutancy threatens not only the status quo, but also threatens to alter history. For the first time, mutants have a choice. They can retain the thing that makes them unique and gives them their powers, although that also isolates them, alienates them from normal humanity, and marks them as targets for humans afraid of mutants. Or they can take the cure, give up their powers, and become humans. Magneto (Ian McKellen), the mutant mastermind and powerful adversary of the X-Men, believes that taking the cure won’t always be voluntary, and that one day mutants will be in internment camps where the government will force them to take the cure. Magneto gathers a mutant army, a brotherhood of mutants, including X-Men turncoat Pyro (Aaron Stanford) and such new faces as Juggernaut (Vinnie Jones) and Callisto (Dania Ramirez), to wage war against humanity and any mutants that stand in his way. However, a powerful new ally, one even more powerful than Magneto, joins the brotherhood – a mutant with power to trigger the war to end all wars. Known as Phoenix, this mutant’s arrival also causes deep turmoil within the X-Men.

X-Men: The Last Stand is a very well made film. Brett Ratner (the Rush Hour franchise) directed a movie that doesn’t have many dry or dull moments. This is a graphic film in terms of violence, but it is also visceral and purposefully driven. Ratner visually captures the script’s rough interplay of ideas about bigotry, conformity, self-defense, and zealotry. It’s all about an “eye for an eye” and “get you before you get me.” The film also has especially high production values. In terms of cinematography, this is the best looking film in the X-Men franchise. It has a gritty futuristic look when necessary, but can also come across as a lifelike, moody drama and character piece when needed. The sets, costumes, and art direction are as good as those in any superhero film (except for maybe the Spider-Man

The acting is good, quite good in fact. The script and director allow Hugh Jackman to show a more dramatic and human side of Wolverine, he’s more a character than he is the cool, killing machine (as he was in the second X-Men film, X2), and Jackman, a fine actor, is more than up to the task of being a somber, stern, and sober actor. Halle Berry, who’d long demanded more screen time and more meat in her role as Storm, gets it here. Her Storm makes an effective leader, and though some of Storm’s dialogue sounds clumsy coming out of her mouth, Berry takes on her larger part with brazen confidence. Ian McKellen is masterful as Magneto; his words carry the force of a born leader, a king, and a master strategist. Proud and bold, he has his eyes on the prize, and he doesn’t waver even when his troops falter. The younger cast members, new mutants like Ashmore, Paquin, Stanford, and others add freshness to this dire third film.

However, for all that this flick is so well made, X-Men: The Last Stand is too dark and downbeat, and (considering that children are a big part of its intended audience) a bit too spicy with language and one almost-love-scene. Some of the action sequences are overdone, over the top, and some seem embarrassingly desperate, such as the one at the Golden Gate Bridge. The surprise new character seems like a fifth wheel/third leg – overdone, unnecessary, and maybe even misused and underutilized. At the end of the day, X-Men: The Last Stand just manages to outdo its gloom and doom with good acting and some surprisingly adroit wit and many clever asides. It’s sad to see this trilogy put forth such a dark final(?) piece, but this mosaic does have enough shiny pieces that I can at least give it a “B” with reservations.