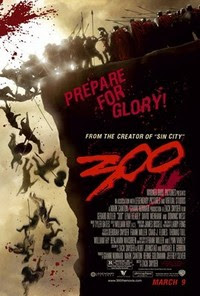 Sometime after Star Wars became a massive, worldwide box office hit in 1977, one movie critic called the movie, “cinema of the sensations.” I took that to mean the kind of movie that bombards the viewer with dazzling visual effects, explosions, loud noises, and all the vicarious thrills his mind could stand. Some movies do that well, and director Zach Snyder (who helmed a fantastic remake of Dawn of the Dead in 2004) delivers heady cinema of the sensations in 300, his film adaptation of Frank Miller and Lynn Varley’s graphic novel of the same name.

Both film and graphic novel are highly fictional and stylized accounts of the ancient Battle of Thermopylae. 480 B.C.: The King (and self-proclaimed god) of Persia, Xerxes (Rodrigo Santoro), leads the forces of his empire against Greece. While the city-states of Greece slowly gather their armies, King Leonidas of Sparta (Gerard Butler) leads 300 Spartans to face a Persian army of millions. Meanwhile, back in Sparta, Leonidas’s queen, Gorgo (Lena Heady) faces subtle rebellion from Theron (Dominic West), a politician on the Spartan Council.

300 is like Oliver Stone’s JFK – less about history and more about mythmaking. There is little accurate here, by admission of both Miller and Snyder. This is simply an action movie, and history is merely the line upon which Snyder and his creative crew can hang lots of thrilling, action scenes full of ghastly, but cool imagery. Snyder and his co-screenwriters smartly mix in glorious CGI-enhanced battles, as gruesome and horrific as they are epic. Every moment is punctuated by bombast. Pomposity and high falutin’ speeches and proclamations about duty, honor, sacrifice, etc. alternate between being twaddle and inspiring.

As Robert Rodriguez did when adapting Frank Miller’s graphic novel series, Sin City, for the screen, Snyder creates 300 as a virtual world. Much of what we see was made in a computer. Snyder shot the film in front of a blue screen (and some green screen). Like Sin City’s world, 300’s is stunning eye candy – a color infused world in which scenes are posed as if they were in a comic book. 300 is not so much a comic book movie as it is a movie comic book. Characters and objects stop, freeze, or move slowly through a still environment, making this movie a child of The Matrix’s “bullet time.” It’s so beautiful, even the Old Master painters might be impressed.

Still, the key towards enjoying 300 is the invigorating thrill. The cast, especially Gerard Butler as Leonidas, sells this movie, even more than the dazzling colors and effects and even more than Snyder and his creative crew’s obsession with the grisly and ghastly aspects of hand-to-hand combat. As the handsome, rugged, and oh-so-manly Spartan king, Gerard transforms this kick-butt action violence geared towards teenaged boys and young men into a romance novel for men. It’s historical fiction and romantic adventure delivered as a video-game style movie. But a movie so based on alluring visuals must be scene rather than described.

Pay no attention to the British accents on these Greek characters, ignore the subtle racism (the villains are mostly black and brown-skinned), and take no notice of the wack-a-doodle history, Zach Snyder’s 300 is Mel Gibson’s Braveheart on acid and made in a computer.