The Adventures of Ichabod and Mr. Toad 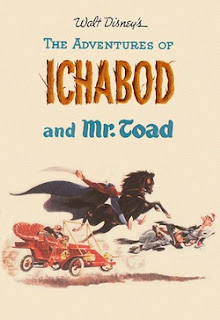 The Adventures of Ichabod and Mr. Toad was the last of Walt Disney’s “package films,” which were films comprised of two or more animated short subjects instead of a single feature-length story (such as Bambi

The first short feature, “The Adventures of Mr. Toad” is based on Kenneth Grahame’s 1908 novel, The Wind in the Willows

, an acknowledged classic of children’s literature. J. Thaddeus Toad (Eric Blore), the proprietor of Toad Hall, is in deep financial straights because of his spendthrift ways regarding whatever fad he’s chasing, and he also starts spending much of his time with a wastrel horse named Cyril Proudbottom (J. Pat O’Malley). His latest obsession is “motor mania,” the desire to have a car. When his fixation lands him in prison, it’s up to Mr. Toad’s friends, Mole (Colin Campbell), Water Rat (Claud Allister), and Angus MacBadger (Campbell Grant) to save him.

The second story, “Ichabod Crane,” is based upon Washington Irving’s classic American short story, “The Legend of Sleepy Hollow

,” first published in 1820 and later contained in his story collection, The Sketch Book of Geoffrey Crayon

, Gent. Bing Crosby narrates and sings the story of itinerate schoolteacher Ichabod Crane, who arrives in the Dutch settlement of Tarry Town, New York to be the new schoolmaster in a secluded glen called Sleepy Hollow. Ichabod falls in love with Katrina Van Tassel, the daughter of the wealthiest of the local farmers, much to the chagrin of her other suitor, Brom Bones. Brom decides that he needs to scare Ichabod off, so near the end of the Van Tassel’s annual Halloween ball, he tells the tale of The Headless Horseman that haunts Sleepy Hollow. After leaving the party, Crane, who is deeply superstitious, has a wild encounter with the Horseman… or does he.

Although not considered to be one of the very best Walt Disney animated features, The Adventures of Ichabod and Mr. Toad

has some of the most beautiful color seen in animated films. It’s all practically applied and not just for the sake of being pretty; in fact, the film won a 1950 Golden Globe for “Best Cinematography, Color.” While the Mr. Toad segment is very nice (and features beautiful character and set designs), the treat here is, of course, Ichabod Crane. What makes it better is Bing Crosby, whose narration and singing give Ichabod Crane color and warmth.

As strange as it may sound, this short segment (which runs less than 35 minutes) features some of the best animation Disney ever did. Talk about the art of animation: the characters move flawlessly in a symphony of movement that is an exercise in mathematical precision. The sequence that begins when Ichabod enters Sleepy Hollow until the end of his race with the Headless Horseman should make any shortlist of all time great action sequences in animated films. It’s scary (as scary as I remember it as child), and a great example of something Disney did well in their classic animated movies – create an atmosphere of fear.

The color, the sound, and the motion: even this work considered a minor affair shows that when Disney animators were at the height of their powers, they were really up there. Actually, there’s an action sequence at the end of Mr. Toad that would be considered the best work by any other animation studio. Still, it pales next to the chase in Ichabod, and that’s what makes The Adventures of Ichabod and Mr. Toad essential Disney.