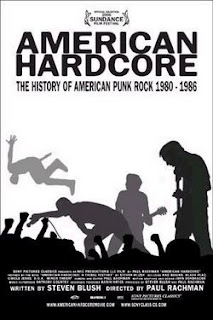 Director Paul Rachman and writer Steven Blush joined forced to created the music documentary, American Hardcore, tracing punk rock music’s turbulent history from 1980 to 1986. The filmmakers focus on “thrash” hardcore bands and the punk music scenes in cities such as Boston, New York, and Washington, D.C., and various locales in California. They also explain the cultural and political backdrops and social context in which hardcore was born.

The thesis of American Hardcore is that hardcore began in 1980 and ended in 1986, although some will argue that new and different versions of it continued after ’86. The film also says very little about the pre-hardcore bands like The Ramones or Sex Pistols or that period of 1977-80 that set the stage for hardcore. The film is really a quick and broad overview of the hardcore punk scene that, while it might frustrate hardcore fans, experts, historians, etc., is easily digestible for people who know little or nothing about hardcore (including this reviewer).

Rachman packs the film with archival concert footage, which is something akin to a revelation when seeing these kinds of performances for the first time. It’s just mind-boggling to watch all that youthful energy and mania – both onstage and in the crowd. This film also features many photographs by Edward Colver. For many viewers, next to the concert footage, the best material in the film will be the many interviews with members of hardcore bands active during the 1980-86 period:  Bad Brains, Black Flag, Circle Jerks, Gang Green, MDC, Minor Threat, SS Decontrol and many more. There are even appearances by musicians influenced by the scene (Flea of Red Hot Chili Peppers and Moby). The best thing about American Hardcore is that it offers something for everyone from punk rock fans to newcomers, and while the film seems to lose energy after the first hour or so, it’s still fun to watch and an eye-opening experience.