Review: "Bamboozled" is Clever and Truthful, But Too Angry 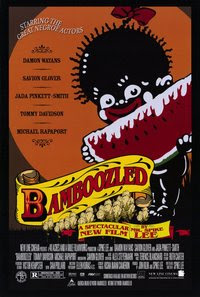 Pierre Delacroix (Damon Wayans) is a frustrated African-American television writer, tired that the television industry and entertainment in general ignores the cultured (he thinks) taste of the black middle class in favor of lowbrow and stereotypical so-called ghetto entertainment. Determined to show up his crude boss Thomas Dunwitty (Michael Rapport, Deep Blue Sea), Delacroix, with the help of his able assistant Sloan Hopkins (Jada Pinkett-Smith, Set It Off), develops a blackface program, The New Millennium Minstrel Show. Blackface shows were crude forms of entertainment in which whites wore black face paint to imitate blacks, and Delacroix and Hopkins create their blackface TV program in a secret pact to protest the way white media bosses disrespect black viewers. Sure that the show will fail and get him fired, Delacroix watches the show become a huge sensation.

Bamboozled is writer/director Spike Lee’s (Malcolm X, Summer of Sam), most incendiary and most passionate film since his heralded Do The Right Thing

. It is a biting satire with razor teeth and an unrelenting surrealistic farce. Lee aims the satirical portion of his film, the behind the scenes making of the minstrel show, squarely at the entertainment establishment and the audiences for American entertainment. Lee severely heightens the farcical nature of the minstrel show beyond what one would expect of a “real” minstrel show. He does it make his jabs at blackface, tom shows, minstrel shows, and other forms of drama that belittle minority groups hit that much harder.

As passionate as the film is (and as well intentioned as it may be) it is horribly inconsistent. I’m not sure if the inconsistency is deliberate, a means to show how complex issues of race and culture in America are, or if that’s just a sign of poor screenwriting (of which Lee has been accused on a few occasions). Bamboozled is at times uneven, mean-spirited, and confusing; at other times, it is hilarious, pointed, intelligent, and witty. The main problem is that those two sides jumble the film’s messages. The viewer may have an idea of what the film is about, but the viewer may have a difficult time figuring out what exactly Lee wants to say or what he is actually saying.

Some of the acting is very good. Tommy Davidson as Womack, one half The New Millennium Minstrel Show’s star team, Sleep’n Eat, is a fine comedian and a very funny, but underutilized comic actor with some strong dramatic chops. Savion Glover, both as Manray and as his minstrel alter ego Mantan, is known for his work on Broadway, but he is very good here, and the camera loves him almost as much as the lights of Broadway love him. Wayans as Delacroix swings from funny to unbelievable; his character’s mannerisms and speech patterns are so mocking that the character is unbelievable and, at times, too unsympathetic to watch. The waste in the film might be the under use of Ms. Pinkett-Smith: sympathetic and intelligent, the story could well have revolved around her, as she is the only character connected to all the main players.

This is a missed opportunity to make a point about the exploitation of black entertainers, past and present, and about the stereotypical portrayal of African-American in the media and in popular culture. As a film, it is daring in its subject matter, and that’s worth points in its favor. However, movies tell stories and entertain. Lee fills Bamboozled

with so much ire while seemingly ignoring his story. The movie is too disjointed for many viewers to follow and too angry and preachy to be entertaining.

It is good that Spike Lee

uses film to communicate daring subject matter, even if when get a mixed bag like this. He hit it right on the head with Do The Right Thing

, I’m hopeful and sure that he’ll get it right again.


2000 National Board of Review: Freedom of Expression Award