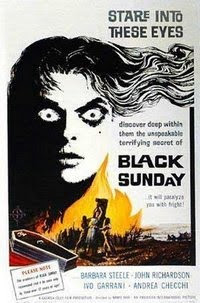 Acclaimed Italian horror director Mario Bava made his directorial debut with the film, La Demonio del Maschera, which first received a U.S. release in 1961 under the title, Black Sunday. Previously, Bava had finished other directors’ films, but did not receive a screen credit as a director until Black Sunday

. The story is based upon a Russian folktale, and Bava also co-wrote the film, but did not receive a screen credit as a writer.

Condemned to die as a witch in the 17th century, Princess Asa Vajda (Barbara Steele) returns two centuries after her execution to wreak vengeance on her executioners’ descendents. Those descendents are Prince Vadja (Ivo Garrani), his son, Prince Constantine Vajda (Enrico Olivieri), and Katia Vadja (Barbara Steele), who looks just like Princess Asa. Two men, Dr. Thomas Kruvajan (Andrea Checci) and his young companion, Dr. Andre Gorobec (John Richardson), traveling through the countryside, stumble upon Asa’s grave and unwittingly reawaken her. Soon, Dr. Gorobec and a local priest are in a race against time to save Katia from becoming the sacrifice that will allow Asa to walk the Earth again and unleash Hell’s undead demons.

Simply put, this is a masterpiece of black and white gothic horror filmmaking. Steeped in rich atmosphere and lush shadows, Black Sunday

is truly frightening. (It had me with my back pressed against the sofa.) Filled with a hellish sexual yearning and sadism, Black Sunday’s production values are worthy of a Hollywood historical epic. Black Sunday is pure visual dark poetry – a horror film that refuses to be forgotten.