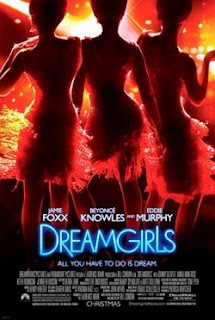 Writer/director Bill Condon wrote the screenplay that brought the famous musical Chicago to the screen in 2002, and the film went onto to win six Academy Awards including "Best Picture" in 2003. Condon, who won an Oscar for writing his 1998 film Gods and Monsters, takes on the movie musical again with Dreamgirls, a film adaptation of the beloved 1981 Tony Award-winning musical of the same name. Condon uses music (featuring the score of Henry Krieger, who also scored the original musical) and song to drive this film into a memorable musical experience that recreates a particular period in American music.

They get their big break when they meet Curtis Taylor, Jr. (Jaime Foxx), an ambitious car salesman determined to make his mark on the music industry. He wants to form his own record label and get its music heard on mainstream radio stations - meaning white-owned - in a time when the Civil Rights movement is still struggling to get a foothold and when black recording artists are mostly marginalized. He sees the Dreamettes as the right angle to make that move to the mainstream. They've got the right talent and could be the right product to sell - if Curtis can shape it all the way he sees fit.

Curtis talks the girls into allowing him to become their manager, and he gets them a gig singing backup for James "Thunder" Early (Eddie Murphy), a pioneer of the new Detroit sound that blends soul music and rock 'n' roll. Early, however, is stuck singing on the "Chitlin' Circuit," which, at the time, meant mostly black-owned clubs. Curtis promises Early to move him into the mainstream, replacing Early's original manager, Marty Madison (Danny Glover), but that's not the only changes Curtis plans on making. He changes the Dreamettes name to the Dreams, and moves to replace Effie as the lead singer. As a new musical age dawns and Curtis' new sound takes hold, some people are fading away and others are finding that their dreams have come true, but at a high price.

Dreamgirls is indeed a movie musical, pretty much in the fine tradition of Hollywood musicals, except that its major characters are all black. It's an absolutely lovely film. In terms of the film's creative staff (art direction, costumes, cinematography, etc.), Dreamgirls is as good as any in recent memories, and the Dreams' costumes seem right out of a musical dream. Tobias Schliessler's cinematography creates a crystal clear heavenly aura of color that mixes the hyper-reality of the music world with the harsh reality of failure and betrayal.

The acting is quite good, but the singing is what makes these performances so memorable. As an actress, Jennifer Hudson isn't yet as skilled as some she beat out for the Oscar she earned for this film, but film performances aren't always built just on dialogue and physical movement. What put her over the top were those extraordinary pipes. Watching this film, it's easy to see why she amazed people with both her powerful, booming voice and her ability to interpret songs. Coming from a novice actress, she impressed enough awards voters to win all the big prizes.

In fact, so much of this movie's narrative and characterization is done through song. Jaime Foxx and Beyoncé Knowles who are professional singers sound better than they ever have. Eddie Murphy who has recorded albums using a voice that imitated other singers, but was on its own not distinctive, sounds better than I thought it was possible. Anika Noni Rose, as Lorrell, is a classically trained actress, Broadway veteran, and Tony Award winner, and she sounds great in a part that puts her character in the shadow of Knowles and Hudson's.

Condon deserves so much of the credit for bringing actors singing and singers acting together to create an ensemble cast that brings this colorful fantasy to life. Dreamgirls is a musical, but it is also a musical revue and music-filled overview of a time when African-American music was trying to break into the mainstream. In that, Dreamgirls is an intimate look at the lives of black artists, entertainers, musicians, singers, composers, and businessmen. The songs may unite the audience, but the experience of the African-American struggle to be accepted in the wider society and culture may seem foreign to so many. Still, Condon's colorful song-filled, dreamy myth making of real musical history will delight many for a long time to come.