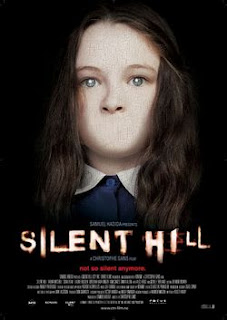 Rose Da Silva’s (Radha Mitchell) adopted daughter, Sharon (Jodelle Ferland), walks in her sleep and calls out the name “Silent Hill.” Rose discovers that Silent Hill is a town located in Toluca County, West Virginia. In fact, Silent Hill is very near Brahams, which is where the orphanage from which Sharon came is located. Against her husband, Chris’ (Sean Bean) wishes, Rose takes Sharon and races for Silent Hill. Meanwhile, she attracts the attention of Brahams Police Department motorcycle officer, Cybil Bennett (Laurie Holden).

Rose and Sharon, however, have an auto accident near the boundary of Silent Hill. Rose awakens to find herself bruised and Sharon missing, so Rose walks into the mist-enshrouded Silent Hill searching for daughter. However, Officer Bennett has also followed them to Silent Hill, and she finds herself in the same predicament Rose does – lost in a seemingly abandoned town that sometimes transforms into a decayed “otherworld” where Rose and Cybil are stalked by horrifying creatures that walk with a disturbingly jerky gait. The two women band together to find Sharon, but the mystery of Silent Hill only deepens when they finally encounter Silent Hill’s human inhabitants.

Silent Hill is based upon the popular horror survival video game of the same title (the first of five – as of this writing – was released in 1999). Horror survival video games usually have players battle an onslaught of undead (usually zombies and monsters) and other supernatural creatures. The best known of this genre is Resident Evil, which has also spawned two film versions. Director Christophe Gans (Le Pacte des Loups – The Brotherhood of the Wolf ) and writer Roger Avary (Quentin Tarantino’s co-writer on Pulp Fiction) have based this movie on the first two games in the series.

Half of the time, the narrative is vague, and those unfamiliar with the game will struggle to figure out what’s going on. The film is also way too long to be so vague; it’s a horrible film going experience to struggle for nearly an hour of the film’s running time not really understanding the concept or central idea. On the other hand, Silent Hill has a lot of superbly creepy atmosphere, and it bears more than a striking resemblance to the paintings and drawings of Clive Barker, a noted horror novelist who is not as well known as an artist. It’s not often that a movie so ably captures what it’s like to be trapped in a nightmare – knowing you have to wake up but you can’t escape the hideous and repulsive monsters your mind has created. Akira Yamaoka (who scored the game series) and Jeff Danna’s music for the film combines eerie synth notes and beats with random noises and sound effects to create the perfectly chilling horror flick score. However, for all its genuine chills, Silent Hill is ultimately a mediocre flick worth a rental. It could have been memorable, if only the filmmakers didn’t act as if all of us (video gamers and non gamers) should already know what’s going on before we take a seat in the local theatre.