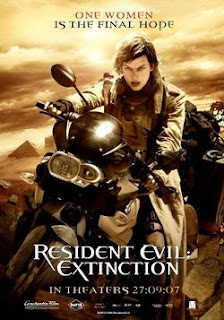 HORROR/ACTION/SCI-FI with elements of drama

Following the events of Resident Evil: Apocalypse, the recent film, Resident Evil: Extinction, presents a world where only pockets of humanity scattered around the globe remain because the world has been overrun by flesh-eating zombies. Series heroine, Alice (Milla Jovovich), hides in the Nevada desert, traveling the lonely highways on a motorcycle. Fate forces her to rejoin her old comrades Carlos Olivera (Oded Fehr) and L.J. (Mike Epps) and a group of new survivors, including Claire Redfield (Ali Larter), K-Mart (Spencer Locke), and Nurse Betty (Ashanti). They’re all part of a lonely convoy of small trucks and one school bus, trying to evade the undead humans, who were turned into flesh eating zombies by the T-virus.

Meanwhile, Dr. Isaacs (Iain Glen), a scientist from the Umbrella Corporation, the people responsible for the creation of the T-virus is seeking Alice’s whereabouts. Isaacs believes her blood is the key to finding a way to destroy the virus. He tracks to Alice and the convoy just as they arrive in what is left of Las Vegas, which is now nearly buried in sand and likely stocked with the undead.

Resident Evil: Extinction is an improvement over Resident Evil: Apocalypse, but Extinction isn’t as thrilling or as frightening as the original 2002 Resident Evil. Extinction is somewhere in the middle, but closer to the first film. Director Russell Mulcahy (best known for directing Highlander over two decades ago) piles on more visual style and flair than Apocalypse had, so the fight scenes in this film are much more exhilarating. Although often predictable, Extinction is, at times, genuinely chilling and creepy thanks to the stellar makeup on the zombies.

Yeah, the filmmakers sell us out at the end by setting up the story for another film, but what they deliver in Resident Evil: Extinction is mostly good. Bring on the next film.