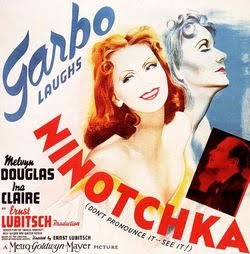 1939 was a banner year for movies, seeing the release of films such as Goodbye, Mr. Chips, Gone with the Wind, Mr. Smith Goes to Washington, Stagecoach, The Wizard of Oz, and Wuthering Heights, among many, many others. Another film stood out because of a catchy advertising campaign. When ads for the film, Ninotchka, proclaimed “Garbo Laughs!,” film fans knew they were in for a special treat as the legendary actress Greta Garbo starred in her first romantic comedy. The now-famous film slogan was actually created before the screenplay was written, and the film was built around it. Ninotchka, now considered by some to be a classic film about romance in Paris, went on to earn Oscar nominations for Best Picture, Actress, Original Story, and Screenplay.

Three Soviet envoys: Michael Simonavich Iranoff (Sig Rumann), Buljanoff (Felix Bressart), and Kopalski (Alexander Granach) arrive in Paris during springtime to sell some czarist jewels to earn enough money for their government to buy bread for the Russian populace, as the country’s own food production has come up too short to feed the Soviet masses. The trio, however, falls in love with their decadent new capitalist environment and spend their time being wined and dined. Nina Ivanovna Yakushova, known to her friends as Ninotchka (Greta Garbo) is the dour, severe Soviet official sent to straighten out the mess her three comrades have made. However, the special magic of Paris in the spring turns business to pleasure when she meets a suave Frenchman named Count Leon D’Algout (Melvyn Douglas). Leon is a friend of the Russian exile, Grand Duchess Swana (Ina Claire), who is the rightful owner of the czarist jewels in question, as she was a noblewoman before the Bolsheviks overthrew the Czarist Empire in Russia. Initially, Leon’s only thoughts are to reclaim the jewels for his friend and probable lover, the Grand Duchess, but he falls for Ninotchka, who resists at first, but soon succumbs to Leon’s charms. Will their budding romance survive a jealous Grand Duchess and Ninotchka’s Soviet bosses.

The film works on several levels, but its best charms come from Greta Garbo’s great comic performance as the title character and from the hilarious screenplay that wickedly pokes fun at the stuffy and dour Soviet regime of the times. Ms. Garbo is sly and droll as the no-nonsense and no-fun Ninotchka who first arrives in Paris. Her kabuki-like mask of seriousness brings the best out of Melvyn Douglas, and his performance as Leon, trying to woo Ninotchka, to make her laugh. As she finally gives in and laughs at Leon’s jokes, we can see Ms. Garbo’s mask begin to slowly break before she finally erupts in genuine laughter that really turns on this film’s magic.

The screenplay (co-written by the legendary Billy Wilder) is known for all it’s witty asides and sharp jabs at the Soviets, but the writers also take gentle swipes at the overly pampered and spoiled rich who live so lavishly that they don’t really appreciate or notice how well they have it. Directed with flair and finesse by Ernst Lubitsch (The Shop Around the Corner and To Be or Not to Be), a director known for his sophistication, Ninotchka is a film treasure and a great romance for moviegoers who love the enchanting best of that genre.

This film entered the National Film Registry, Library of Congress in 1990.