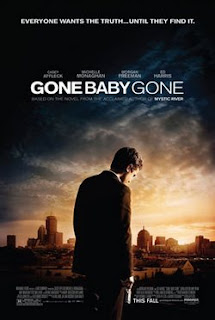 Like Martin Scorsese did before him in 1973 with Mean Streets, Ben Affleck visits the tough streets of a city in which he’s familiar, Boston, for his film Gone Baby Gone, based upon a Dennis Lehane (Mystic River) novel. There Affleck tells a harrowing tale of shocking crime, brutal violence, and ultimate betrayal set in the seedy underbelly of a lower working class neighborhood.

Patrick and Angie take their investigations to the extra mean streets of the Boston neighborhood where the major players, including themselves, live. Patrick and Angie soon trace the child’s disappearance to some kind of deal gone bad involving her mother, a loud and vulgar drug addict/alcoholic named Helene McCready (Amy Ryan, in an Oscar nominated role). Ultimately, Kenzie finds himself risking everything, including his relationship with Gennaro, their sanity and lives, to find Amanda. Nothing is what it seems, and the case is vastly complicated.

If Ben Affleck was known as a pretty boy actor who made bad career choices, now he’s known as an up and coming director to watch. Gone Baby Gone, which Affleck also co-wrote with Aaron Stockard, is a sharp, edgy and morally ambiguous tale. The detective angle of the story is certainly a piece of pulp crackerjack that is as sweet and bitter as dark chocolate, but also as addictive as faerie food. Once you bite into Affleck’s beautiful/accursed confection, you will never leave it, and it won’t leave you.

That’s because the heart of Gone Baby Gone is so frighteningly familiar to viewers – the unsettling notion of a small child stolen by a monstrous human who savages, violates, and ultimately destroys a young life by murder or psychological ruin. However, novelist Dennis Lehane’s tale takes you to even darker regions below the surface of this familiar scenario, and Affleck doesn’t shy from visualizing the story into a film that goes for the vulnerable places on your body and in your mind. It’s the place where the self-righteous find that not only is the road to damnation paved with good intentions but that their justifications make them as bad as the worse people.

Ben Affleck also found his film gifted with a number of high quality performances, including some from Michelle Monaghan, Morgan Freeman, Ed Harris, and Amy Madigan, among others. The stand outs are the director’s brother, Casey Affleck, and Amy Ryan. Affleck, playing the little tough guy, is a bubbling cauldron as he takes his Patrick Kenzie from the sweet guy who really cares to the tough guy/bad ass detective who can take on the most dangerous on mean street.

Amy Ryan is superb as Helene McCready. Simply put, the audience has no reason to believe that Helene is not a real-life breathing person with an ugly past, a pathetic present, and a loser future. Ryan makes you believe that Helene is both lost in an addictive personality and a totally lousy mother. This is the richness of Ben Affleck’s Gone Baby Gone.

2008 Golden Globes: 1 nomination: “Best Performance by an Actress in a Supporting Role in a Motion Picture” (Amy Ryan)