"Jesus Camp" Not as Passionate as its Subject Matter 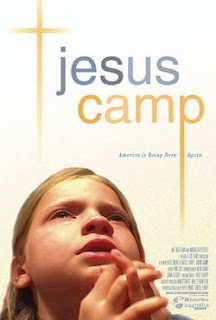 The documentary, Jesus Camp, takes a sharp look at a particular part of the Evangelical revivalist subculture that indoctrinates devout Christian children and trains them to become “Christian soldiers in God’s army.” These are the children will grow up to become the adults who deliver the fundamentalist community’s religious and political messages.

The film focuses on Pastor Becky Fischer and her Kids on Fire summer camp at Devil’s Lake, North Dakota, where Fischer and her cohorts attempt to solidify and deepen the spirituality of the preteen children who come from around the country to attend the camp. Fischer and company also exhort the children towards political activism in which the goal is “taking back America for Christ.” The film also focuses on Levi, a boy who is already preaching to other children.

Early in Heidi Ewing and Rachel Grady’s documentary film, a preteen girl finishes a faux-break dance routine, and then, tells the camera that she has to watch out and make sure that she isn’t “dancing for the flesh” and is instead dancing for Christ. Watching this film gives the viewer a chance to see how adults brainwash children and indoctrinate these impressionable young minds into whole heartedly buying the adults’ ideologies and beliefs. While this might appall some people, and, considering the politics of Jesus Camp’s subjects, also make liberals uncomfortable, brainwashing children is nothing new. As the film’s creepy star, Pastor Becky Fischer of Kids on Fire says, children never have a choice in what adults teach them. Thus, her attitude is more or less, why not program them with her ideas and lifestyle instead of allowing someone else to program them.

Certainly, Jesus Camp is excellent view of how religious factions and organizations indoctrinate children, but the directors certainly consider this a more important issue than I think it is. Ewing and Grady likely mean Jesus Camp to be more of a warning than a cautionary tale, and some viewers may find the contents of this documentary to be a sign of the looming apocalypse. No doubt there is a fair amount of shocking material here, but it’s shocking in a humorous sort of way. For instance, during a mini-rant about that literary “warlock,” Harry Potter, Pastor Becky mentions that Potter would have been killed in the Old Testament. When the members of a military family shown briefly in the film pledges allegiance to the “Christian flag” while holding an American flag, an Israeli flag, and some kind of flag with a cross on it, I laughed, (albeit with a bit of unease). Perhaps, the creepiest “star” of the picture is Levi, a boy who has really bought into the idea that he is going to be a preacher.

Why Jesus Camp received an Oscar nomination for “Best Documentary, Features,” over what I consider to be better documentary films (such as Why We Fight and Who Killed the Electric Car?), I’ll never know. There’s nothing cinematic about this documentary film, and it looks like something a television network such as CBS or ABC could have produced, although it is a co-production of A&E IndieFilms, a branch of the A&E cable network.

One thing that may have helped this film earn Oscar attention (and that of critics and audiences) is an appearance in the film by Pastor Ted Haggard of the Colorado Springs mega-church, New Life Church. In November 2006, Haggard resigned (or was removed) from his position at New Life Church after he confirmed some of the allegations of an alleged male prostitute that Haggard himself participated in homosexual sex and drug abuse. The resignation took place after Haggard was filmed for Jesus Camp.

Posted by Leroy Douresseaux at 11:44 AM