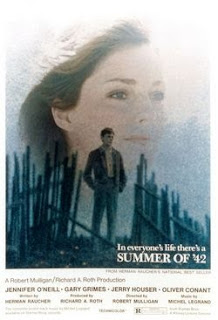 Summer of ’42 is a coming-of-age drama released in 1971. An eventual Oscar-winner, the film is based on the memoirs of screenwriter, Herman Raucher, specifically the summer of 1942.

The film is set on Nantucket Island (off the coast of New England), where 15-year-old Hermie (Gary Grimes) is spending summer vacation with his parents. Joining Hermie on the island are his best friend, Oscy (Jerry Houser) and his second best friend, the introverted nerd Benjie (Oliver Conant) – the Terrible Trio. They spend a lot of time playing and hanging out on the beach, where one day they spot a young soldier carrying his new bride (Jennifer O’Neill) to a house on the beach. The boys are struck by the bride’s beauty, especially Hermie, who is unable to get her out of his mind.

The boys’ afternoons on the beach bring them into contact with scantily-clad girls, and their thoughts turn to sex. Oscy is obsessed with losing his virginity, and though Benjie is scared off by the idea of sex, Hermie and Oscy try to learn everything necessary to lose their virginity. Meanwhile, Hermie strikes up a friendship with the young bride after her husband leaves the island to return to military service. It is a relationship that will change his life.

Neither idealized nor romanticized, Summer of ’42 seems natural in its depiction of teens dealing both with the pangs of adolescence and the first stirrings of adulthood. Instead of being sentimental, Raucher’s script focuses on the details and moments through which the audience will understand the boys’ thoughts and feelings and perhaps recognize them as similar to their own experiences.

Director Robert Mulligan captures the nuances and subtleties of Raucher’s script, but also zeroes in on the youthful exuberance and rascally nature of his ostensible leads, Gary Grimes as Hermie and Jerry Houser as Oscy, which certainly further endears the characters to the audience. Both Grimes and Houser give pitch perfect performances, especially Grimes, who gives Hermie an impressive range of emotions. Grimes and Houser make the characters’ mixed-up emotions and ignorance about the facts of life seem both absolutely real and perfectly normal.

Summer of ’42 is a superb coming of age story that no one who enjoys stories about growing up should go without seeing. Even after four decades, this World War II era story seems authentic and timeless.