Review: "Desperado" Both Beautiful and Brutal 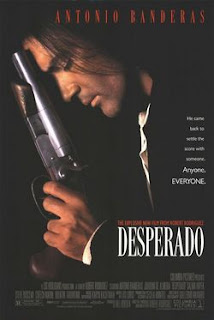 ACTION/WESTERN with elements of crime

Robert Rodriguez followed up his ultra-low budget independent thriller, El Mariachi, with the larger-budgeted ($7 million, which is low by Hollywood standards) Desperado. The film is a slightly re-imagined sequel. El Mariachi is now played by Antonio Banderas, replacing Carlos Gallardo, who played the character in the original film and who does make a cameo appearance here. This time the no-named musician (we do learn his name by the end of the film) is stalking Bucho (Joaquim de Almeida), the last Mexican drug lord with connections to the death of his girlfriend (as seen in the first film). He meets Carolina (Salma Hayek), a beautiful bookstore owner and falls in love with her while also taking on a small army of Bucho’s henchmen in a small, dusty border town. El Mariachi learns, however, that Bucho has a strong link to his past.

Some described Robert Rodriguez’s poetic way of presenting violence in this movie to the cinematic styles of John Woo and Sam Peckinpah, and the shoot-‘em-ups in Desperado are indeed eye candy, especially the violence in the first hour of this film. This first half of the film sparkles with black comedy, acerbic wit, and violent slapstick, but as the film goes on, it begins to list. The romantic scenes are dry and are only road bumps in the narrative. Whereas El Mariachi was short and tightly efficient, Desperado is a bit long and a little padded. Still, the combination of Guillermo Navarro’s warmly hued photography and Rodriguez’s visual acumen make for a beautiful, brutal, ballet of film violence, proving that violence does indeed look good on film, if the director knows what he’s doing. And with each movie, Rodriguez proves to be a natural born moviemaker.

Posted by Leroy Douresseaux at 9:52 AM