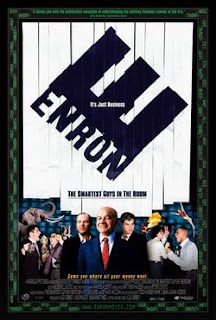 By the turn of the century, Enron was the seventh largest corporation in America, but the company was built on fraudulent accounting and phantom profits. By the time the company died, its top executives had milked the company for over a billion dollars in personal income, while investors, retirees, and employees lost everything including retirement benefits and 401k’s. Enron the film has the usual blend of archival, video, and news footage one would expect of a documentary. It also has interviews and a wealth of information from documents and insiders including former executives and employees of the company. The film even includes an interview with former California Governor Gray Davis who took the fall for the mess a few energy companies, Enron in particular, made of the state’s electrical supply earlier this decade.

The film is a riveting and fascinating documentary, and though it may seem like a left-leaning political movie (and it does take swipes at the Bush Administration), Enron: The Smartest Guys in the Room is a crime story about a business climate in which corporate executives not only steal money and commit fraud, but it is also about people whose greed seems to know no limits. The film does have a few weaknesses, which keeps it from being a truly great documentary. First it’s not long enough to cover the complicated mess that was Enron. Secondly, Gibney needed to slow down and explain in simple terms complicated accounting and business practices and explain exactly what products Enron sold or what services it provided. Thirdly, the film is too much geared towards people already very familiar with the Enron story.

But for people who already know what’s going on, this is good stuff that will leave you wanting more – much more. Gibney smartly interviews so many people intimately involved with Enron at one point or another in the film, and the interviews with former Enron traders and other employees make this film more than just some documentary. It is a vital American movie.