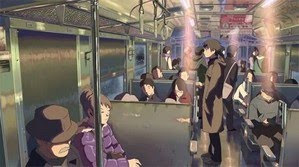 The ANIME NIGHT premiere includes a pre-show reception party as well as a Q&A session about the film, which screens at 7:00pm and 8:45pm. VIZ Cinema is located inside NEW PEOPLE at 1746 Post St. in the heart of San Francisco’s Japantown. General admission tickets for the film screening are $10.00.

All attendees will also receive a special gift bag containing:

1. A re-mastered retail DVD of 5 Centimeters Per Second, courtesy of Crunchyroll.
2. Certificate for a "Buy One, Get One Free" tickets for AOD's upcoming 2011 convention
3. Free one-month Crunchyroll anime membership

Along with a myriad of other great gifts from Pocky, Red Bull and more! A $60 value for only $10!

The first 25 paid attendees for either screening will also receive a FREE one-day pass to Anime On Display 2011, the Bay Area’s largest annual anime convention.

The J-Pop Summit Festival 2010 presents a variety of fun Japanese pop-inspired attractions including fashion shows, a theatrical film premiere, live art performances, and mini-concerts by some of Japan’s hottest bands. Innovative artists and companies from the Bay area and Japan will join in with an array of products for sale in open air displays on both sides of Post Street and a food court highlighting Japanese cuisine will further complement the celebration. More details are available at: http://www.j-pop.com/.


About NEW PEOPLE
NEW PEOPLE offers the latest films, art, fashion and retail brands from Japan and is the creative vision of the J-Pop Center Project and VIZ Pictures, a distributor and producer of Japanese live action film. Located at 1746 Post Street, the 20,000 square foot structure features a striking 3-floor transparent glass façade that frames a fun and exotic new environment to engage the imagination into the 21st Century. A dedicated web site is also now available at: www.NewPeopleWorld.com.
Posted by Leroy Douresseaux at 9:18 AM