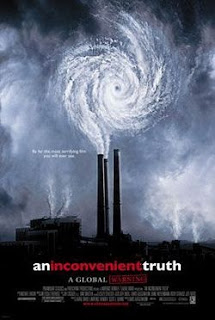 In An Inconvenient Truth, director Davis Guggenheim captures former Vice-President Al Gore in the midst of waging his passionate campaign to inform people about global warming. The former presidential candidate has traveled the world for several years delivering a visual presentation (think slide show using Apple’s Keynote presentation program) on global climate change. His argument is that people and their governments must confront global warming now or face devastating consequences in the coming decades.

Guggenheim’s documentary film captures this presentation on film, and intersperses Gore’s show with the story of Gore’s personal journey from childhood to idealistic young college student who saw an environmental crisis on the horizon and from brash young Senator to environmental advocate. Gore also allows Guggenheim to open a door into the personal tragedies of his life.

Gore had been showing his global warming presentation in school auditoriums and hotel conference rooms for years with little fanfare. When a group of filmmakers approached him about committing this presentation to film, they may not have known then that they would be creating the most popular documentary film of 2006. Since An Inconvenient Truth debuted at the 2006 Sundance Film Festival, many people have been surprised that Al Gore could be so engaging with a disarming sense of humor. The funny and passionate Gore of An Inconvenient Truth existed throughout his political career, but much of the media portrayed him otherwise during his 2000 presidential run.

Honestly, I don’t know if An Inconvenient Truth will convince many, if any, viewers about the dangers of global warming and the problems it is causing and will cause. For the most part, this documentary comes across as preaching to the choir and to the converted. Still, like many people with a cause for which they are mega passionate, Gore, for all his warmth, does come across as somewhat strident in the film.

An Inconvenient Truth is like a visual document of a toasty lecture by our favorite, old crusty professor. This may be nothing more and nothing less than PBS, The Discovery Channel, and their like have been showing for years. The difference here is that if you like Gore, you’ll be very entertained and informed by this and like the fact that he’s the one doing the entertaining and informing.

Posted by Leroy Douresseaux at 8:56 AM