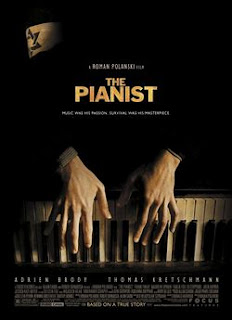 Director Roman Polanski, writer Ronald Harwood, and actor Adrien Brody all won Oscars® for their work on The Pianist, a film based upon the memoirs of Wladyslaw Szpilman (Adrien Brody), a Polish Jew who survived for five years in the Warsaw ghetto during World War II. It’s arguably the best non-documentary film about the Holocaust and Jewish oppression at the hands of the Germans after Schindler’s List.

Stylistically, The Pianist is similar to Schindler’s List in that both films visually have an atmosphere of classic cinema from the Golden Age of Hollywood film – the late 1930’s and 1940’s. From a technical aspect, the film is beautifully photographed with a gorgeous color palette that looks luscious even when melancholy gray tones are omnipresent. Also of top caliber are the art direction and set decoration, the costume design, and the original music by Wojciech Kilar.

What else can I say? This film, because of its subject matter, is difficult to watch, but from a filmmaking point of view, The Pianist is near perfect. Everyone deserved their awards and nominations, and Polanski cemented his place as a daring filmmaker willing to take chances and making great films when he succeeds.

If there must be one main reason to see this film, Adrien Brody’s performance is it. He plays Szpilman as both an eternal optimist and as a survivor, and the thing that is most uplifting about this film (which is filled with sorrow and tragedy) is that Szpilman survives. When he’s beaten down to being little more than a pitiful animal and a pathetic human skeleton, he nimbly skirts death’s every blow. Add the beautiful musical performances of Chopin and Beethoven, each one exquisitely staged and shot by Polanski and his cinematographer Pawl Edelman, and a great film is even greater.