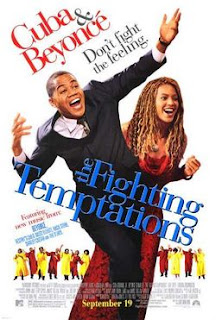 Many, many movies are so hackneyed and contrived that you can see the contrivances minutes and if not hours ahead of the actual arrival time. Painfully predictable are the ideas and woefully stereotypical are the characters, but sometimes the movie is so absolutely entertaining and hilarious that it gives a bit of a jolt to the tired term “feel good movie.” Director Jonathan Lynn’s The Fighting Temptations is one that breaks away from the worn mold of which it was created. It is so awe-inspiring and uplifting that it just might have feet tapping for years to come.

Darrin Hill (Cuba Gooding, Jr.) is a fast-talking junior level advertising executive who gets canned from his job for lying on his resume. He gets notice that his Aunt Sally (Ann Nesby) has died, so he returns to his hometown of Monte Carlo, Georgia for the funeral, a hometown he and his mother Maryann Hill (Faith Evans) left decades ago when Maryann was kicked from the church choir for singing secular music in a juke joint. Aunt Sally has left Darrin a small fortune ($150,000 in stocks), but to get it he has to direct the local church choir and take them to the annual Gospel Explosion music contest in Atlanta. Darrin, however, faces a stiff challenge for control of the choir from a self-righteous Christian hypocrite (LaTanya Washington). Of course, Darrin also finds a love interest in Lilly (Beyoncé Knowles), a single mother, and she mistrusts Darrin whom she sees as a slick conman.

It would be easy to point out how predictable The Fighting Temptations is, but the truth of the matter is that none of that matters. It’s a wonderful fairy tale full of toe-tapping music that takes the tried-and-true movie formula and uses it con mucho gusto to make TFT like an entirely new song. It’s almost impossible to dislike a movie that so immerses itself in Southern and “down home” stereotypes without demeaning the South. It shows that the eccentricities that are familiar to the South aren’t a bad thing, but are what makes living in the dirty worth it in spite of the bad things.

The music and singing, so big-hearted and full-throated, is what makes this film so special. The humor, however, is tart, tangy, sharp, and occasionally very edgy (especially the running commentary and satire of church people and Christian hypocrites) is also what separates it from being a paint-by-numbers R&B/gospel-flavored film. It’s so much fun, and so damn special.

The acting is pretty good, and Ms. Knowles carries herself quite well despite what previews (with scenes taken out of context) might show, plus the girl can sing down the roof with those awesome pipes. Cuba has seen better days (Jerry Maguire and As Good as it Gets), but he’s purportedly seen worse. Most of the time, he seems a bit stiff and over-compensating, but the truth of the matter is that when he’s allowed to let some of his boundless energy and sharp wit out, he’s absolutely fascinating; he just doesn’t do maudlin drama (and there’s some in this film) well.

It would be nice if a wide audience embraces this film, although early indications are that white folks are staying away. It’s a pity since The Fighting Temptations would probably entertain Southerners of all backgrounds as well as audiences who like My Big Fat Greek Wedding because TFT has a good message about love of family and home. And the music’s so damn (Lawd, forgive me) good.