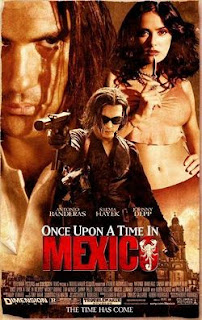 Take a Sergio Leone spaghetti western like The Good, the Bad, and the Ugly and spin it on its head; add the flavor of the Southwest and Mexico, and you just might have director Robert Rodriguez’s Once Upon a Time in Mexico, a follow up of sorts to his 1995 film Desperado, itself a remake of Rodriguez’s El Mariachi. The film is certainly unique, being a mixture of several genres, but not really being like anything else in particular. As with most Rodriguez’s work, the film is of his own unique and zesty recipe, even if the film ends up being quite messy.

Sands (Johnny Depp) maybe a rogue agent of the Central Intelligence Agency, but like a lot of things in this movie, it’s not entirely clear what he is and what he wants. He hires the legendary El Mariachi (Antonio Banderas, reprising his role from Desperado), the guitar case assassin, and his compadres to kill Mexico’s El Presidente (Pedro Armendariz). Sands, however, is into manipulating a whole slew of players including a police officer (Eva Mendes) for whom he has amorous feelings, retired FBI agent (Ruben Blades) and a drug lord (Willem Dafoe), among others. It’s an explosive plan Sands has set for detonation during Mexico’s Day of the Dead celebrations, but he just might find himself scorched by the explosion.

Once Upon a Time has a lot going on in it, and there is so much to see; the film is literally a visual feast. Its most glaring deficit, probably the most important element, is a weak story and an even weaker script. Even if you take this film at its face value, which is that the tale is more impressionistic and symbolic than literal, the narrative is too jumbled to make much sense. There’s a lot of goofiness in the hyper-violence, and the film’s action sequences have a rapid and rabid, colorful, manic, music video cool about them. The film’s color palette is so lush and delicious that the film seems practically edible. Still, when all the dazzling is done, by the end of the film, the best you can do is agree that it seems as if the good guys won.

The acting (what there is of it) is mostly good, and Depp (He’s one of those actors that the camera really loves) steals the show. He is, however, not the lead, and although this is an ensemble drama, his character, if not the most important, is played by the most intriguing cast member. Maybe, he should have been the lead and his character more than just a catalyst (the crap starter) because Banderas, as the central figure here, just doesn’t work.

Rodriguez, as usual, is a one-man gang filmmaker. A musician, he scored the film, and edited it. He shot the film himself using digital video camera technology (which filmmaker George Lucas introduced him to in 2000), and he is, of course co-producer, writer, and director. I’m impressed with his verve, but I wish there was a little more meat to Rodriguez’s film. He’s a jack-of-all-trades, but sometimes, he doesn’t seem to be very good at any one. This is one of those times when a collaborator or two would have better served the end product. Once Upon a Time in Mexico is a good idea that doesn’t come to fruition. Although on the surface it may seem otherwise, it ends up being like a lot of summer action flicks, full of sound and fury, and not, surprisingly, empty.

Posted by Leroy Douresseaux at 7:42 AM