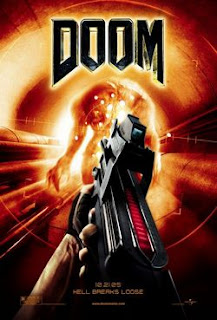 When something goes horrible wrong at the Olduvai Research Station on Mars, causing a Level 5 quarantine, the Rapid Response Tactical Squad, hardened Marines heavily armed with enough firepower to neutralize any kind of enemy (or so they think), head for the red planet. Arriving on Mars via the Ark portal (kind of like a stargate from the film Stargate and the TV series), the Marines, led by Gunnery Sergeant Asher “Sarge” Mahonin (Dwayne “The Rock” Johnson), seal off the portal and find the research facility in a state of panic.

The most important scientists that they came to rescue are dead and the one that is still alive, Samantha Grimm (Rosamund Pike), is actually the twin sibling of one of Sarge’s marines, John “Reaper” Grimm (Karl Urban), and Samantha claims not to know what happened to her colleagues. When Sarge and the RRTS begin trekking through the research installation’s countless halls and rooms, they find nightmarish creatures of unknown origin around almost every wall and corner.

Doom is the latest videogame translated to the movie screen, and in this action horror flick, macho clods with little acting talent or ability run around with big guns shooting at big ugly monsters. The film is like a low-rent version of Aliens, with its Space Marines battling the aliens, or Predator, with a covert action team fighting an alien monster in the jungles of Central America. Doom, however, isn’t nearly as entertaining as either of these movies, nor is the quality of the filmmaking in the same league. Doom isn’t even as good as the Resident Evil franchise.

Still, Doom is mildly entertaining, although it is incredible lame – yes, it is so badly made that it is physically handicapped. The writing is atrocious and the acting isn’t worth the effort of coming up with mean, clever things to say. The directing captures that horror movie atmosphere of the boogeyman around the corner. In fact, the monster reveals are quiet good; these creature jump out of the shadows with the flair of the best cinematic ghouls. Some of the attackers are even straight out of a George Romero movie, although I can’t understand why zombies and the living dead were so popular with game developers in the 1990’s.

I guess the film is enjoyable for what it is. Overlook the fact that this film is garbage, and you might enjoy this as a throwaway rental if you’re a guy, but don’t expect your lady friend to sit through this with you – even if she says she really loves you. This is a dog of a movie, not a “good” bad movie, but a “bad” bad movie. Doom is an FPS game, or first person shooter game, and the movie is meant to appeal to the 13-year old boy (or the 13-year old in the adult man) who would love to have a big gun. He can blast away at monsters that in turn explode in gory bursts when the bullets hit, and, of course, he won’t notice that the movie, like the FPS game, is short on story so it can be long on violence.