Original "Nightmare on Elm Street" IS a Classic 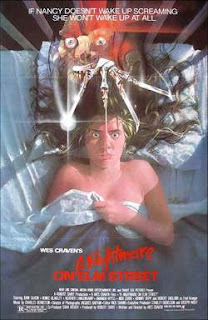 Tina Gray (Amanda Wyss) has a dream in which she is stalked by a mutilated man with a second distinctive feature, razor-sharp knives attached to the fingers on his right hand. Her friend, Nancy Thompson (Heather Langenkamp), has experienced a similar dream involving the same sinister figure. Even Tina’s estranged boyfriend, Rod Lane (Nick Corri), has dreamed of this creepy man.

After Tina is murdered and Rod is blamed, Nancy discovers that Fred Krueger (Robert Englund), a child murderer killed by a mob of angry parents, is the man in her dreams. Krueger has returned to haunt the children of his killers, using their dreams to get his revenge from beyond the grave. When local teens fall asleep, Krueger attacks and kills them in their dreams, which also kills them in the real world. Nancy and her boyfriend, Glen Lantz (Johnny Depp, in his screen debut), hatch a plan to drag Krueger into the real world, but will that help them or make things worse?

In spite its low budget, A Nightmare on Elm Street delivers the thrills, chills, and scares of a movie with many times its budget. This first installment of the franchise has a high creepy factor because the narrative muddles reality with surreal moments in which imagination and the dream world intrude on everyday reality. One could make an argument that all or most of the movie is a dream, and that neither the narrative nor its characters are reliable.

Plus, in Fred (eventually Freddy) Krueger, A Nightmare on Elm Street has a villain who can terrorize his victims in their dreams and occasionally wreak havoc in the real world, which strengthens this story’s unsettling atmosphere. He is a bloodthirsty demon with a wicked sense of humor, and his glove, with its sharp knives, is one of the great weapons in horror movie history and in cinematic history, in general. Practically all the credit for Freddy Krueger’s fame belongs to character actor, Robert Englund, who achieved a rare feat – creating movie monster whose fame spans generations and who has international appeal.

The film’s target audience – the audience that first saw it back in the mid-80s – and likely many that see it now, can identify with Nancy and her friends. Adults don’t take them or their fears and concerns seriously, leaving them at Krueger’s mercy, which is ironic considering that the adults killed Krueger in order to protect their children. The teens are on their own, unable to discern the shifty reality that has become their existence. Like them, we are left alone to figure out this crazy, scary dream world, and A Nightmare on Elm Street delivers. It is the real deal in scary movies, and Freddy is a fictional serial killer who seems almost real.