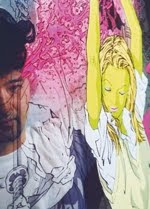 MAKOTO AIDA: CYNIC IN THE PLAYGROUND PROFILES ONE OF JAPAN’S MOST CONTROVERSIAL ARTISTS IN NEW VIZ PICTURES DVD

VIZ Pictures, an affiliate of VIZ Media, LLC that focuses on Japanese live-action film distribution, has announced the release of the newest volume of its ongoing NEW PEOPLE ARTIST SERIES – Makoto Aida: Cynic in the Playground. The documentary, releasing today, is directed by Yusuke Tamari, carries an MSRP of $25.92 U.S. / $35.99 CAN and will be distributed exclusively by VIZ Media.

To celebrate the DVD’s release, VIZ Pictures has also scheduled a special theatrical premiere of the film tonight at 7:00pm at the VIZ Cinema, located inside NEW PEOPLE, the cutting edge entertainment destination devoted to Japanese pop culture located in the heart of San Francisco. For tickets and more information about this event, please visit www.vizcinema.com or www.viz-pictures.com.

Makoto Aida is one of the most diverse and controversial artists in Japan working prolifically in various media including sculpture, painting, video, installation and manga. Known for his diverse and often controversial images, Makoto Aida shares his work and private life as he creates his "Human Project" and "Shinjuku Castle."

“Makoto Aida’s art often exhibits a dark cynicism that is infused with elements of a lighthearted, lowbrow-style humor as he tackles heavy subjects such as terrorism, pedophilia, and societal misogyny,” says Seiji Horibuchi, President and CEO of VIZ Pictures and the founder of NEW PEOPLE. “This documentary, which is the fifth release in our NEW PEOPLE ARTIST SERIES, is a rare look at one of the most provocative artists of our time, and lets his true character emerge through his intense creative process.”

The NEW PEOPLE ARTIST SERIES is an intriguing collection of documentaries introducing modern Japanese Pop artists to the American audience. All of the highlighted artists possess unique views and inspirations to create captivating works of art.


About VIZ Pictures, Inc.:
Based in San Francisco, California, VIZ Pictures, Inc. licenses and distributes selective Japanese live-action films and DVDs, with focus on Japanese "kawaii (cute) and cool" pop culture. VIZ Pictures strives to offer the most entertaining motion pictures straight from the "Kingdom of Pop" for audiences of all ages, especially the manga and anime generation, in North America. Some titles include DEATH NOTE, 20TH CENTURY BOYS, and TRAIN MAN: DENSHA OTOKO. VIZ Pictures is also the producer of NEW PEOPLE, a part of the J-Pop Center Project, a unique entertainment destination bringing Japanese pop culture through film, art, fashion, and retail products. For more information please visit www.viz-pictures.com or www.newpeopleworld.com.