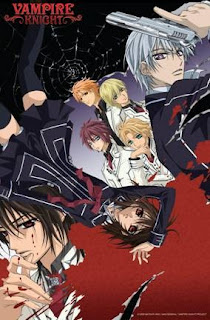 VIZ Media, LLC (VIZ Media), one of the entertainment industry’s most innovative and comprehensive publishing, animation and licensing companies, beckons fans to sink their teeth into the gothic romance of the animated series VAMPIRE KNIGHT, launching online today on VIZAnime.com.

VIZ Anime is the official online home to some of VIZ Media’s best-loved animated series and a burgeoning social network for fans to connect and form an interactive community. Over 400 episodes are currently available and new content is added on a weekly basis. VIZ Anime is accessible at: www.VIZAnime.com.

Cross Academy is attended by two groups of students: the Day Class and the Night Class. At twilight, when the students of the Day Class return to their dorms, they cross paths with the mysterious Night Class on their way to school. Yuki Cross and Zero Kiryu are the Guardians of the school, protecting the Day Class from the Academy's dark secret: the Night Class is full of vampires! Yuki Cross has no memory of her past prior to the moment she was saved from a vampire attack ten years ago. She was adopted by the headmaster of Cross Academy, and now works alongside Zero to guard the Academy's secret. Yuki believes that vampires and humans can coexist peacefully, but her partner has different ideas...

“With its cast of edgy and engaging characters combined with a dark sexy storyline, VAMPIRE KNIGHT is destined to be one of the most exciting anime releases of 2010,” says Brian Ige, Director of Sales, Home Entertainment. “Fans can also look forward to the release of VAMPIRE KNIGHT on DVD, under the Shojo Beat imprint, on July 20th. Stay tuned for more details coming soon on some hot VIZ Media anime summer releases!”

VAMPIRE KNIGHT (rated ‘T+’ for Older Teens) is based on the best-selling manga series created by Matsuri Hino, who burst onto the scene in Japan with her debut title, Kono Yume ga Sametara (When This Dream Is Over) in LaLa DX magazine. With the success of subsequent series such as CAPTIVE HEARTS and MERU PURI (both published domestically by VIZ Media), Hino has firmly established herself as a major force in the world of shojo manga. VAMPIRE KNIGHT is currently serialized in LaLa magazine in Japan.