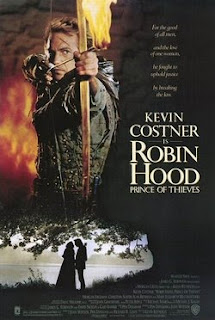 ADVENTURE/ROMANCE/DRAMA with elements of action and comedy

Plagued by controversy, Kevin Costner’s reworking of the Robin Hood legend, Robin Hood: Prince of Thieves was the first blockbuster hit of 1991 and finished the year in the top five highest grossing films. On the way to the screen, Costner and his producing partners (Costner doesn’t actually get screen credit for his role as a producer) locked director Kevin Reynolds (Costner’s friend at the time) and editor Peter Boyle out of the editing room in order to cut their own version of the film.

Critics and fans panned Costner for his wooden acting, stiff speaking style, and bad English accent or half-accent, but the movie is entertaining. It’s not Errol Flynn’s The Adventures of Robin Hood (of which I find critical and fan opinion a tad bit overblown), but Prince of Thieves is rousing entertainment. Despite it’s almost television movie quality, Robin Hood is charming with its humor, slightly cheesy romance, and stirring adventure.

In this version, Robin of Locksley (Costner) returns from the Third Crusades with a foreign friend, the Moor Azeem (Morgan Freeman). Robin finds his father dead and his lands dispossessed to the Sheriff of Nottingham (Alan Rickman). Nottingham is starving the poor peasants and stealing their money, as well as gold and other treasures in order to create a large enough bribe to get the English barons to join him in a revolt against the still-missing King Richard the Lionhearted. Locksley becomes Robin Hood and joins a band of peasants hiding in Sherwood Forest. He convinces them to follow his lead in a revolt against Nottingham. Robin also has time to romance a childhood friend, Marian Dubois or “Maid Marian” (Mary Elizabeth Mastrantonio), who is also the flower of Nottingham’s eye.

Alan Rickman drew very favorable responses, even raves, for his performance as Nottingham, and he gives the film a decided edge with his gallows humor and his odd combination of self-deprecation and egotism. His Nottingham serves to make Costner’s stiff Robin Hood really seem like a bold and brave leader against Nottingham’s tyranny. Mary Elizabeth Mastrantonio is a lovely presence and she brings enchantment to the Robin and Marian romance. This isn’t a great film, but Robin Hood: Prince of Thieves is a simple film that gives simple pleasures.

NOTES:
1992 Academy Awards: 1 nomination: “Best Music, Original Song” (Michael Kamen-music, Bryan Adams-lyrics, and Robert John Lange-lyrics for the song "(Everything I Do) I Do It for You")

Posted by Leroy Douresseaux at 8:07 AM