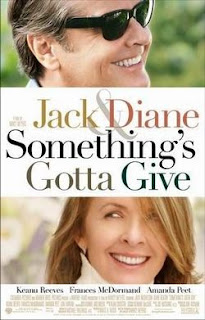 In his new film, Something’s Gotta Give, Jack Nicholson plays Harry Langer, a 63 year-old New York City music executive with a taste for younger (than 30) women. He follows his latest trophy, Marin (Amanda Peet), to her mother’s East Hampton beach house, where he meets her 50-something mother, Erica Barry (Diane Keaton), who takes an immediate disliking to him. However, Harry’s world is turned upside down when he suffers a mild heart attack. When Marin goes back to the city, she leaves Harry at the beach house in the care of her mother and his doctor, Julian (Keanu Reeves). Soon Harry and Julian are competing with each other for Erica’s affections. For Harry, it’s a new stress in his life, as he’s never dated a woman Erica’s age, and Erica hasn’t loved in the decade since her divorce. Awkwardness and hijinks ensue as Jack’s film becomes Jack and Diane’s film.

Simply put, this is a fantastic film, and I enjoyed nearly every minute in; in fact, there are very few missteps in this film. Nancy Meyers, who directed the smash hit What Women Want

, has proved herself to have a deft touch with romantic comedies made for the adult sensibilities. Her script is confident and exudes the assurance of a writer who knows exactly where she’s going. You can see the ending coming, but the trip there is a hoot. When it all wraps up, SGG will still surprise you with how it closes the curtain on this very nice love story amongst the senior set.

Jack Nicholson gives yet another of his great performances as an actor. This isn’t one of those times when “Jack’s being Jack.” He really tries to bring a character to life and yet still color it with the charm of his film personality. The surprise is a surprise that she’s a surprise – Diane Keaton. When it comes down to it, this is her film, and the character and situation are very similar to Woody Allen’s Annie Hall

, which earned Keaton a Best Actress Oscar. She grabs Erica by the hair and gives it her all – funny, charming, witty, self-deprecating, smart, strong, vulnerable, and human.

Amanda Peet and Frances McDormand are very funny. Peet’s character is more or less just a vehicle to get the leads together, but Ms. Peet makes herself a strong presence in every scene in which she appears. The biggest pity is that Ms. McDormand could have made this film great; not only is she a fine actress, but her character is strong enough to steal scenes no matter who else is around. Each time she’s in the film, she leaves you wanting more. As for Keanu, he is what he is – a pretty face that tries hard, but fails half the time. It’s a good thing that his part is small; there’s no way he could have kept up with Nicholson and Ms. Keaton.

Something’s Gotta Give is a fine romantic comedy filled with love, loss, confusion, passion, and redemption. It’s about the surprises life, both painful and pleasurable, that life has. It’s a fun film for people with grown up minds.