Review: "Religulous" is Brilliant and Funny 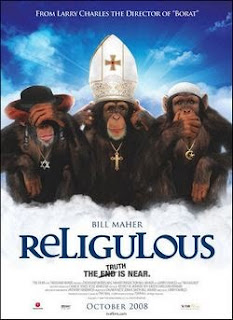 Comedian and politically provocative talk show host Bill Maher took on religion and faith in the hot-button documentary, Religulous, a title derived by blending the words “religion” and “ridiculous.” Maher examines the presence of religion in many of the big news stories of recent years, from Muslim rioting over cartoon depictions of Mohammed in European newspapers to a born-again Christian being President of the United Sates (George W. Bush).

Maher, currently the host of HBO’s "Real Time with Bill Maher," also skewers the current state of organized religion, while visiting Jerusalem, Salt Lake City, the Vatican, and other holy destinations. Of the many questions Maher asks on his journey, the main questions are why are believers of many faiths so sure that their religion is right, and why they’re so certain others are wrong?

One thing I wish that Bill Maher had done in Religulous was to offer more commentary from cultural, historical, political experts on religion and faith. Often this movie seems like Maher vs. the crazy religious people, which makes Maher come across as a prankster (a la Borat) snarking on the loons. Still, what Maher and director Larry Charles do present is fantastic and also funny on so many levels.

Some of Religulous is laugh-out-loud funny, but some of it made me cringe as much as I laughed behind my hands. I don’t think Maher is able to get an answer to the question of why believers from a variety of faiths are so sure their religion is right, and why they’re so certain others are wrong? Many of the people Maher meets are quite sensitive to someone not only questioning their faith, but also questioning why they are religious.

In fact, the attitude from many people is that they don’t want outsiders questioning their faiths, although many of these same people seem to have large, answered questions of their own about their religions. Maher often interrupts his subjects, and many times, he should have let them rant, even if their ranting made them look bad, scary, or crazy. The best line in Religulous came from self-avowed Evangelical Christian and U.S. Senator Mark Pryor, D-Arkansas, when he said, “You don't need to pass an IQ test to become a senator.” Pryor seemed eager to be interviewed, and while he certainly comes across as a nice guy (maybe even a smart fellow), his willingness to declare his allegiance to superstition is both sad and frightening.

By the end of the Religulous, I got the idea that this film was less about the faithful’s embrace of irrationality, superstition, and blind faith, and more about Maher giving rational people a wake-up call. He thinks that the rational, non-religious are actually in the majority, and one can hope he is right.

That said, Religulous is a great documentary because it takes a blunt, unflinching look at organized religion and faith, not through the eyes of religious scholars and clerics, but by taking on the foot soldiers and rank and file believers who give voice to their faith, warts and all. Only Maher, brilliant as both a social observer/critic and provocateur, could deliver a documentary about blind faith that is almost as powerful as blind faith.