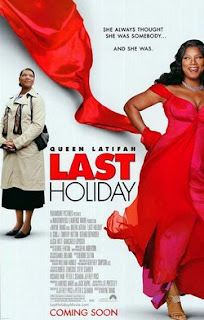 COMEDY with elements of adventure/drama/romance

Georgia Byrd (Queen Latifah) lives a quiet life in New Orleans, La., where she is a shy cookware salesman for Kragen department store. Suddenly, one day, a company doctor diagnoses her with a rare and terminal disease of the brain, and she only has three weeks to live. Georgia, who has always lived her life in a box tucked inside her big dreams, decides to go out with a bang. She quits her job, cashes in her bonds and retirement accounts, and embarks on a vacation to the central European resort village of Karlovy Vary.

Georgia arrives at the Grandhotel Pupp having undergone a metamorphosis that, in turn, affects everyone around her, and her new, uninhibited personality shakes up hotel staff and guest alike. Georgia makes a bond with the hotel’s venerated chef, Didier (Gerard Depardieu), and even attracts the attention a Louisiana Congressman, Senator Dillings (Giancarlo Esposito), who is from her neighborhood. Coincidentally, Georgia also runs into her old retail magnate boss, Matthew Kragen (Timothy Hutton), and his besieged assistant/lover, Ms. Burns (Alicia Witt), who are both convinced that she is a business rival. In spite of all the attention she draws, Georgia enjoys the hotel’s snowy slopes, spectacular spas, delectable dinners, and midnight balls. Living a lifetime in the span of a few weeks, Georgia is about to get an even bigger surprise on New Years Day, as an old coworker, Sean Matthews (LL Cool J), arrives with a shocking announcement.

Last Holiday, a remake of a 1950 starring Sir Alec Guinness, is the perfect vehicle for Queen Latifah’s talents. Her abilities as a comic actress and her friendly, opening personality shine in this film, which might seem like piffle, but has some meat on it. Director Wayne Wang, known for his independent films like Smoke

and Chinese Box, and for such mainstream, family friendly fare as Maid in Manhattan and Because of Winn-Dixie, smartly plays up to Latifah’s strengths, so where the film might falter on script or characters, it revives whenever the Queen is on stage.

And there are some weak characters. Timothy Hutton’s Matthew Kragen is the typical narcissistic antagonistic billionaire wannabe who, of course, has lost sight of what really matters in life; heck, it would be nice if he could just be nice to people. It’s no surprise that it is Georgia Byrd who will eventually help him see the light. Alicia Witt’s Ms. Burns is Kragen’s typically put upon assistant and sweet stuff on the side. I’ve always liked Alicia, and she does indeed give Ms. Burns, as she does with any character she plays, a bit of her distinctive personality. That’s kind of the same thing LL Cool J does. He may not be an A-list movie star, but the man is a good actor and belongs in movies. Giancarlo Esposito also makes the most of his underutilized character, Senator Dillings, just by doing his usual good work.

Ultimately, this is Queen Latifah’s show, and if you like her, you’ll really dig the charming Georgia Byrd with her effervescent personality. You’ll probably get a champagne kick out of this poignant, but more-sweet-than-sad film. The drama in Last Holiday might come across as a bit phony, but there is something honest and true about Georgia’s plight to finally stop waiting for life to happen and try to at least live part of her fondest wishes.