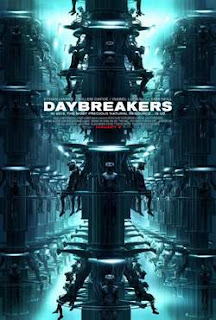 Daybreakers mixes new flavors and ingredients into the old blood that is vampire apocalypse movies. This U.S./Australian co-production has some fresh ideas and some bite to it, but ultimately, the filmmakers, The Spierig Brothers (Undead), seemed content to make another action movie, or at least focus on action.

In the film: by the year 2019, a vicious plague has transformed most of Earth’s population into vampires. With the human population down to five percent, the world is losing what is now its most precious resource – blood. Edward Dalton (Ethan Hawke) is a vampire and also a researcher for the corporation, Bromley Marks. Dalton is trying to create a blood substitute to answer the growing vampire food crisis because of the shrinking blood supply.

Dalton encounters a covert group of humans and their charismatic leader, Lionel “Elvis” Cormac (Willem Dafoe) and his right-hand woman, Audrey Bennett (Claudia Karvan). They are working on a way to turn vampires back into humans and have already made a remarkable discovery which may save the human race. However, Bromley Marks CEO, Charles Bromley (Sam Neill), has plans of his own for the future of the blood supply, and he is using Dalton’s brother, Frankie (Michael Dorman), as his thug.

As a narrative, Daybreakers comes together quite well. For what is essentially a vampire, B-movie, this film is thoughtfully shot and staged. It also has pretensions to be socially relevant and offers commentary on the current state of world affairs. Daybreakers’ vampire plague and Bromley Marks’ response to it are metaphors for corporate exploitation of human suffering and also all-consuming greed. Still, this movie often feels disjointed because the thoughtful character and social drama clash with the brutal fight scenes, fierce action scenes, and the occasional bloodshed, which comes in abrupt splatters like rude ejaculations.

Visually, that is OK for a science fiction film that emphasizes sudden violence and brutality, but the Spierig Brothers should have taken advantage of the complicated and well-conceived family dynamics they obviously took the time to create. Playing up the Dalton brothers’ relationship even more would have better served this film than some of the gunfight and vampire attack scenes.

On the other hand, a movie that is so unromantic about vampires can’t be all that bad. Plus, Daybreakers stars three actors that I have always thought have an alluring screen presence: Ethan Hawke, Willem Dafoe, and Sam Neill, and they didn’t disappoint me here. Daybreakers is fun and thoughtful; too bad it subverts its new ideas for old ideas – bloody violence piled upon more blood and violence.