As Ever, Queen Latifah is "Just Wright" 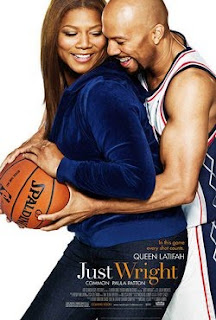 At first glance, the romantic sports drama, Just Wright, is special because it is a screen romance in which both the female and male leads are African-American actors. What makes Just Wright extra special is that it is a Queen Latifah movie. The Queen, with her lovely, open, and joyous film persona, always delivers a good time – even if she has to carry the movie, and she is indeed the leading scorer in this basketball love story.

The film focuses on Leslie Wright (Queen Latifah), a straight-shooting physical therapist; with her, what you see is what you get. Everyone thinks that Leslie is just the bee’s knees, even the men Leslie dates, but none of them will commit to her beyond just being a friend. A diehard fan of the professional basketball team, the New Jersey Nets, Leslie has a chance encounter with the Nets’ NBA All-Star, Scott McKnight (Common). The two surprisingly strike up a friendship, and Scott invites Leslie to his birthday party. At the party, however, Scott is immediately attracted to Leslie’s gorgeous cousin, Morgan Alexander (Paul Patten), who has her sights set on being an NBA trophy wife.

Then, Scott tears ligaments in his knee, threatening the future of his NBA career, and Scott becomes frustrated and withdrawn. Leslie eventually takes the job of helping Scott rehab his knee, but it is a full time job. Leslie begins to have strong feelings for Scott and he for her, but is Leslie destined to be a “best friend” or Scott’s true love?

Just Wright is a formulaic romantic drama. It is kind of a Cinderella story with Queen Latifah’s Leslie Wright as Cinderella, and Paul Patten’s Morgan as Cinderella’s stepsisters wrapped into one radiantly beautiful body. In this scenario, Cinderella is everybody’s best friend, but no one’s true love. The handsome prince is the rich, basketball star, Scott McKnight, who is dazzled by the beauty of the conniving Morgan.

Of course, Just Wright is selling Leslie Wright as being “just right” for Scott, and the film’s script, written by Michael Elliot (Brown Sugar), does everything to make Leslie look better and better as the narrative unfurls and to make Morgan look like a vacuous gold-digger who seems almost sociopathic. Morgan’s character would be a joke except for the fact that the underrated Paula Patten gives the kind of high-quality performance that will make the audience want to see more of Morgan. On the other hand, the script doesn’t do much with Scott McKnight other than make him a good catch as a husband – rich, loyal, and kind-hearted. Even Common, in an awkward and uneven performance, doesn’t make McKnight seem like much more than something nice for a girl to have.

Maybe it is Queen Latifah’s fault. Compared to many rapper-turned-actors, Common is usually good in the movies in which he appears, but screen presence of Queen Latifah (another rapper-turned-actor) often overwhelms her costars’ presence. Whenever she is on television or the big screen, Latifah seems to have a natural sunniness about her, and in comedies, she radiates cheer and poise. She carries herself with confidence and projects that she is comfortable in her own skin. Latifah is Just Wright; the movie clearly exists for her to entertain us. Even Paula Patten and appearances from two wonderful sisters like Phylicia Rashad and Pam Grier cannot change the fact that this is all Latifah, all the time.

When a formula works, it reminds us of why it is a formula; we can rely on it. Just Wright uses the romantic formula with decent if not always good results. But in the end, the lovable Queen Latifah makes it all right.