Review: "Shrek the Third" is Disappointing 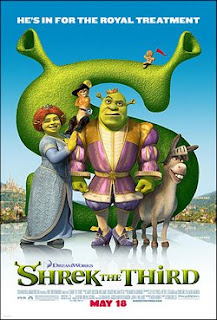 Smelly ogre Shrek (Mike Myers) returns in Shrek the Third, and finds himself in a bit of a fix. When he married Princess Fiona (Cameron Diaz), he never realized that the union would put him in line to become the next King of Far, Far Away, so when his father-in-law, King Harold (John Cleese), dies, Shrek and Fiona are facing the very real possibility of being the new King and Queen.

Determined to remain an ordinary ogre and return to his peaceful life in the swamp, Shrek sets off with reliable pals Donkey (Eddie Murphy) and Puss in Boots (Antonio Banderas) on a long journey to find Fiona’s long lost cousin, Artie (Justin Timberlake), an underachieving high school slacker. Making the rebellious Artie accept the throne proves to be a bigger challenge than Shrek suspected.

Meanwhile, Shrek’s old nemesis, Prince Charming (Rupert Everett), has returned to Far, Far Away with an army composed of some of classic fairytales most infamous villains, including Captain Hook (Ian McShane) and his crew and the Evil Queen (Susanne Blakeslee) from “Snow White.” It’s up to Fiona and her band of princesses: Cinderella (Amy Sedaris), Rapunzel (Maya Rudolph), Sleeping Beauty (Cheri Oteri), Snow White (Amy Poehler) and, of course, Doris (Larry King), to fight until Shrek and crew return to the country for the final battle with Charming.

Considering the box office success of Shrek and Shrek 2 and the fact that they were actually very good films, Shrek the Third’s mediocrity is shocking. It’s only mildly amusing, and there’s nothing distinguishing about the animation, which actually looks really bad (in terms of character movement and design) in several places. There are too many characters, and not enough of Eddie Murphy’s Donkey who is every bit the star of this franchise that Mike Myers’ Shrek is. Any future installments need a significant overhaul because Shrek the Third looks like the franchise is showing tired, old legs.

Posted by Leroy Douresseaux at 8:14 AM