May is for Surfing at VIZ Cinema 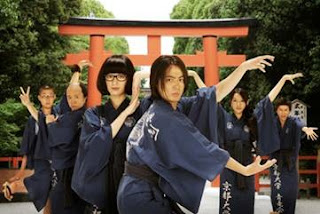 A Fantastic Array Of Japanese Films Feature Surfing, Godzilla, Giant Robots, And The End Of The World To Make This A Month With Something For Every Moviegoer

May is a month to celebrate obsessions at VIZ Cinema. The nation’s only movie theatre dedicated to Japanese film, unfolds its most varied line-up yet, spotlighting a variety of obsessions ranging from surfing to art to science fiction and anime.

VIZ Cinema complements a remarkable new exhibit – THE SURF SHOP – opening Saturday, May 15t in the SUPERFROG Gallery featuring Japanese surf-inspired art, custom surfboards and more with a special BIG SURF weekend of new and classic surfing films. Sci-fi fans will want to catch VIZ Cinema’s first-ever Kaiju Shakedown Godzillathon, with four films featuring the world’s most famous Japanese monster dinosaur on 35mm prints! The theatre is also proud to team with Bandai Entertainment to present the exclusive U.S. premiere of The Disappearance of Haruhi Suzumiya, based on the smash-hit anime TV series. Moviegoers also can look forward to 7 other anime feature films all playing throughout the month of May at VIZ Cinema!

Battle League Horumo, Playing Now Thru May 6th
This combat action comedy is based on the best-selling fantasy novel by Manabu Makime. As a college freshman, Akira Abe joins the club “Azure Dragon” to get closer to his dream girl. At first, the club appears to be an ordinary social club but the new members soon find out about the 1000 year-old tradition upheld by the four universities of Kyoto and the “Horumo” battle. Members must go through rigorous training and learn to manipulate an army of Oni spirits. Starring Takayuki Yamada (Train Man) and Chiaki Kuriyama (Kill Bill Vol. 1).

Makato Aida: Cynic in the Playground, One-Night-Only! Tuesday, May 4th
Come celebrate the VIZ Pictures NEW PEOPLE Artist Series DVD release of Makoto Aida: Cynic in the Playground, which captures the controversial artist he creates his “Human Project” and “Shinjuku Castle,” as well as various moments in his personal life. Aida is internationally known for his diverse and provocative works in various media such as painting, art installations and Japanese manga, and his unique character surfaces through an intense creative process.

Kaiju Shakedown: Godzillathon!, May 8th - May 13th
Catch a 5-day marathon of screenings of the Big G’s 4 most-loved films on 35mm prints with English overdubbing, including Godzilla vs. Hedorah (1971), Godzilla vs. Gigan (1972), Godzilla vs. Megalon (1973), and Godzilla vs. Mechagodzilla (1974). Details and screening times at: www.vizcinema.com.


The BIG SURF Weekend Saturday & Sunday, May 14th – 15th
Coinciding with our new art exhibit THE SURF SHOP at our SUPERFROG gallery, VIZ Cinema is taken over by wave shredding surf movies for the exhibition’s opening weekend! Join the carefree and thrilling surf life and feel the breeze rushing over the rolling waves.

David Brown Special: A Double Feature **With appearance of Director and Co-Producer!

Surfing for Life, May 14th, 7:00pm
This is a vibrant and award-winning documentary about inspiring well-spent lives and offers a totally fresh look at successful aging. Narrated by Beau Bridges, it profiles ten legendary surfers who model healthy aging by staying active and engaged into their 70s, 80s, and even 90s. http://www.surfingforlife.com/

THE SURF SHOP Short Films (3 in a row), May 15th, 12:00pm
3 short films in conjunction with THE SURF SHOP exhibition of SUPERFROG Gallery capture the styles of Japanese surfers.

Kokoro
Through the stunning sound and visuals of this short film, Director Keiichiro Mukai sends his wish to the next generation: co-existence with nature. A heart-felt piece.

Glacier Diary
Not quite a surfing film, Glacier Diary uses similar film techniques used to capture waves for a visceral trip down iced slopes! As part of THE SURF SHOP exhibition, filmmaker Takatoshi Okura tells an amazing story of a glacier photographer’s’ challenge and triumph in Patagonia.

The Endless Summer 2, 4:10pm
A timeless journey continues as Bruce Brown, the king of surfing documentaries, returns after nearly thirty years to trace the steps of the same two surfers as they travel to top surfing spots around the world. A precious film that also documents surfing becoming an influential fashionable subculture through time

20th Century Boys 3: Redemption, One-Night-Only! Thursday, May 20th, 7:00pm
Based on the manga by Naoki Urasawa. The final chapter of the smash hit sci-fi action trilogy has arrived. As World President, Friend tells everyone that mankind will soon be destroyed and only those who believe in him will be saved. As a familiar song plays from the radio, is it proof that Kenji is still alive? Everyone is ready to make their final stand as all mysteries are soon revealed. Ticket price: $25 including movie ticket, DVD, poster & more! Regular Admission: $10. No discounts apply.

The Disappearance of Haruhi Suzumiya Friday, May 21st – Saturday June 5th
Don’t miss the exclusive U.S. Premiere of the mega hit anime movie The Disappearance of Haruhi Suzumiya, presented in association with Bandai Entertainment! Ten days before Christmas, Haruhi came up with another one of her crazy ideas to hold a Christmas party in the club room. The next day, however, Kyon woke up to a world in which Haruhi didn’t exist and no one besides him had any memory of her. How can someone like Haruhi Suzumiya who’s supposed to be the center of the universe just vanish?


About NEW PEOPLE
NEW PEOPLE offers the latest films, art, fashion and retail brands from Japan and is the creative vision of the J-Pop Center Project and VIZ Pictures, a distributor and producer of Japanese live action film. Located at 1746 Post Street, the 20,000 square foot structure features a striking 3-floor transparent glass façade that frames a fun and exotic new environment to engage the imagination into the 21st Century. A dedicated web site is also now available at: www.NewPeopleWorld.com.

Posted by Leroy Douresseaux at 11:14 AM