Review: The Imaginarium of Doctor Parnassus 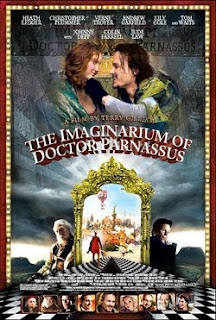 In late January 2008, Terry Gilliam’s film, The Imaginarium of Doctor Parnassus, although still in production, was thrust into the spotlight when one of its headliners died. When he died on January 22, 2008, Heath Ledger had only completed half his work on The Imaginarium of Doctor Parnassus, performing the role of Tony. After filming resumed, Johnny Depp, Jude Law, and Colin Farrell assumed the role of Tony. Each actor portrays a different incarnation of Tony, who physically transforms whenever he travels into a dream world.

Dr. Parnassus (Christopher Plummer) is the leader of a traveling theatre troupe, which includes his sarcastic and cynical sidekick and confidant, Percy (Verne Troyer), a versatile young player and sleight of hand expert, Anton (Andrew Garfield), and Parnassus’ daughter, Valentina (Lily Cole). Parnassus has the gift of inspiring the imaginations of others, and his stage show is called, The Imaginarium of Doctor Parnassus. During the show, Parnassus offers audience members (what few there are) the chance to transcend their mundane reality. They do so by passing through a magical stage mirror that transports them into their imaginations (a kind of dream world), where they are offered two choices, and choosing one or the other determines their fate.

In reality, Parnassus is an immortal, and both his long life and magic came at a steep price. Over the years, he has made various deals with the devil, known as Mr. Nick (Tom Waits). Now, Mr. Nick has come to claim his ultimate prize, Valentina on her upcoming 16th birthday. Meanwhile, oblivious of her fate, Valentina adopts Tony (Heath Ledger), a charming outsider she rescues from dire circumstances, into the troupe. Tony joins the troupe as a barker and sets about to improve the troupe’s fortune. In order to save his daughter, Parnassus makes one final bet with Mr. Nick, and while the rest of the troupe tries to beat the devil, Tony’s motivations for helping come to light.

There is something inimitably romantic about a ragtag troupe of performers traveling about the land, performing on and living in their stage. The Imaginarium of Doctor Parnassus captures the ramshackle romanticism of such a “wagon show,” and the performers, with their whimsical ways and odd charms, are winning, for some reason unknown to me. The narrative, however, is messy. Sometimes, the story comes across as a listless but thoughtful collection of scenes from a college art project. Other times, the film sparkles and brims with inventive imagery that is mesmerizing, especially when the characters jump through the stage mirror. This kind of visual ingenuity is what one can usually expect of a Terry Gilliam film/mind trip, and The Imaginarium of Doctor Parnassus recalls Gilliam’s work as an animator and artist. Some of it reminded me of Gilliam’s short animations for Monty Python’s Flying Circus.

The performances are quite good. Christopher Plummer is brilliant as the tormented Parnassus, and Tom Waits practically matches him in one of my favorite renditions of the devil, Mr. Nick. I would be remiss in not commenting on Heath Ledger’s performance. Although this isn’t close to being his best work, especially since he never got to finish the role, Ledger is quite good as Tony, and the film is certainly livelier when he is onscreen. As for Johnny Depp, Jude Law, and Colin Farrell, it is obvious why they are movie stars. They’re all good actors, and they give good performances here. The camera loves their stunningly handsome facial features, especially the magical Depp.

Thematically, The Imaginarium of Doctor Parnassus is about stories and the importance of imagination. In the film, characters must choose between their imaginations and their desires, presented as a dream, but they must be able to distinguish between a dream of imagination and a dream of desire. The Imaginarium of Doctor Parnassus is not perfect, but I was sad to see this colorful, visually overloaded movie end. That is a feeling I suspect many others also will have.