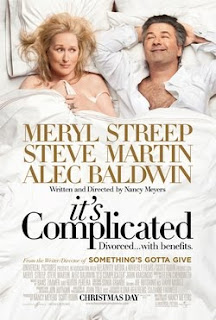 Whatever it may have seemed like in the commercials and trailers, It’s Complicated, a film from writer/director Nancy Meyers (Something’s Gotta Give), is not simply a bubbly comedy about a divorced woman having sex on the side with her ex-husband, while her new boyfriend is caught in the middle. This movie is a family melodrama, romantic comedy, relationship drama, soap opera… well, it actually is complicated.

A divorced mother of three grown children, Jane (Meryl Streep) doesn’t date much. Self-reliant, she focuses her attention on her thriving Santa Barbara bakery and restaurant. After a decade of divorce, Jane has an amicable relationship with her ex-husband, attorney Jake (Alec Baldwin), although Jane still feels uncomfortable in the presence of Jake’s hot young wife, Agness (Lake Bell). For her son’s college graduation in New York City, Jane finds herself staying at the same hotel as Jake, and an innocent meal with him ends with the two having sex.

Thus, begins an unimaginable affair between ex-wife and ex-husband that features frequent sexual encounters. Jake is cheating on Agness, and Jane is sort of cheating on Adam (Steve Martin), an architect hired to remodel Jane’s home. Adam is also healing from a divorce, and he is starting to fall in love with Jane. Jane finds herself forced to confront a number of issues, including if she really is in love with Jake, again.

Early on in It’s Complicated, in particularly the scenes that detail the beginning of Jane and Jake’s “affair,” the movie tries to come across as a bubbly romantic/screwball comedy. I say try because everything seems forced. Early in the movie, Meryl Streep, who hasn’t starred in many comedies, makes a vain attempt at playing the flighty heroine. Streep’s attempts at playing someone caught in comically awkward situations look ridiculous – all that laughing makes her sound like a horse. It is as if the only thing she can think to do with her character is laugh.

Alec Baldwin is usually next to Streep, also forcing it just as hard, doing his schtick. In this film, he just looks like a fat, middle-aged guy desperately trying to pass a reluctant turd. At this point, I have probably made It’s Complicated seem like an awful movie, but it really isn’t.

When the story leaves New York and returns to Santa Barbara, It’s Complicated seems to mature, leaving the silliness behind. The comic tone turns lighter, and the story gets serious about the implications of Jane and Jake’s affair. That is when Streep and Baldwin seem more like themselves, and the better parts of their talents show themselves. Suddenly, the NYC sequence seems like a bad dream, and the real story begins.

Once she makes the other major characters aware of the affair, Nancy Meyers really begins to play with the complications and story angles and situations such an almost taboo romance as depicted here offers. At that point, the audience can do more than just “Ooh” and “Ah” at the scandalous and embarrassing moments. They will feel engaged, because when Meyers really gets to the heart of this complicated matter, she forces the viewer to do more than just be a voyeur looking for easy chuckles. Meyers makes the viewer think: How do Jane and Jake get out of this? Should they do this? How does this affect everyone else? Whom should Jane choose?

It’s Complicated isn’t anyone’s best work – not Meyers, Streep, Baldwin, or even the passive Steve Martin. Still, it is good to see a thoughtful romantic comedy and love story in which the love interests are all over 50.