Pefect for Memorial Day Weekend: The Best Years of Our Lives 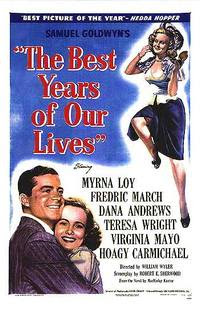 The Best Years of Our Lives is a quasi-epic film about three veterans who return from World War II to small-town America and discover that the war irreparably changed their lives and their families. The three vets didn’t know each other before the war, but they meet and become associates then friends, bonded by the horrors they experienced in overseas.

Al Stephenson (Fredric March) is an alcoholic who returns to his bank job and finds that adjusting to civilian life only fuels his addiction. Fred Derry (Dana Andrews) has trouble obtaining gainful employment. Homer Parrish (Harold Russell) is a Navy man who lost both his arms in an on-ship explosion while he was below deck. Adding to the melodrama, Fred’s wife’s Marie (Virginia Mayo) is a good-time gal, and she refuses to give up the loose and carefree life she had while Fred was at war. Bruised by Marie’s surface-only interest in him, Fred begins a fling or light affair with Al’s daughter, much to Al and his wife’s chagrin. Homer’s old girlfriend Wilma Cameron (Cathy O’Donnell) is still in love with him, but he won’t marry her because he thinks that she feels sorry for him, as he thinks all his family does. Thus, in a fit of pride, he won’t marry Wilma and does whatever he can to discourage the young woman.

The Best Years of Our Lives won several “best film of the year awards” awards including the “Best Picture” Oscar®, one of its seven Academy Award wins. Other Oscars® wins included Best Actor for Fredric March and Best Director for William Wyler (his second of three wins and his sixth of 12 nominations). For his role as the handicapped vet, Homer Parrish, Harold Russell won for Best Actor in a Supporting Role, and he was awarded an Honorary Oscar® for bringing hope to other veterans through his role. See, Russell’s handicap was real; he’d lost both his hands and lower arms when TNT exploded in his hands when he was training paratroopers while stationed in the United States. Ironically, the accident occurred on D-Day.

The film is nearly perfect, from direction to acting (except for a little histrionics and melodrama from some of the actresses). Wyler makes the drama palatable without making it overwrought; it’s a masterful job of subtly. The actors easily convey the veterans’ sense of confusion and sadness, as well as the misunderstandings that come from their readjustment to civilian life. The film is hard-hitting; it doesn’t flinch from stating quite bluntly how much the veterans sacrificed only to return to America and find that most people show no special consideration for them. The country won’t adjust to them or their physical and psychological wounds; the veterans have to adjust and make their own way. It’s because of the help of people who care that they make it, if the vets are willing to reach out and meet their concerned loved ones half the way.

The Best Years of Our Lives is a great American film – timeless in its portrayal of postwar civilian life. I heartily recommend it.

Posted by Leroy Douresseaux at 12:54 PM