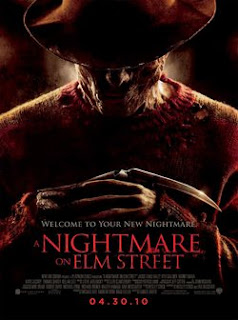 The new film, A Nightmare on Elm Street, is, of course, a remake of the 1984 horror classic of the same title. While people unfamiliar with the original can certainly enjoy this film (and will), I think that it is better if you have seen the original because you can better appreciate the new ideas. The 2010 return to Elm Street is less a remake than it is a re-imagining or retelling of a beloved ghost story in a way that adds fresh fear to boogeyman.

After the peculiar death of a classmate, a group of teenagers in suburban (and fictional), Springwood, Ohio, discover that they have more in common than they ever imagined. First, a horribly disfigured killer is hunting the teens in their dreams. Secondly, he may a mysterious man named Freddy Krueger (Jackie Earle Haley), a dark figure from a shared past they didn’t even know they had. When one of them, Nancy Holbrook (Rooney Mara), discovers that she is of particular interest to Freddy, she joins forces with the smart kid, Quentin Smith (Kyle Gallner), to stop Freddy before he kills them all.

A Nightmare on Elm Street 2010 could have dutifully grinded out the usual thrills of a routine horror movie – people jumping from around corners, monsters suddenly sliding into view from outside the picture frame, pets knocking down knick-knacks to make sounds that chill the blood, etc. This new Nightmare is more thoughtful, and the familiar scare tactics have a delightfully, chilling new edge to them. That’s not just because CGI can exploit the landscape of dreams and nightmares and do things that writer/director Wes Craven could not have done in the original film.

) is so malevolent and menacing as Krueger that he actually seems to embody the remorseless killer. Haley is able to do something that the original Freddy, Robert Englund, was probably not allowed to do – make it obvious that Freddy has a hard-on for murder and a taste for slashing up mommy and daddy’s pride and joy. Freddy’s murderous impulses aren’t just about revenge; they’re also about perversion.

This movie feels like everyone involved – the filmmakers, the creative crew, and the cast – really wanted to make a good film. Director Samuel Bayer (who directed the music video for Nirvana’s “Smells Like Teen Spirit,” among many others) explores the range of color, sound, design, movement, staging, etc. and creates a scary moving picture that is genuine unsettling. Bayer’s A Nightmare on Elm Street is like a bad dream that you want to leave because you know that there is absolutely going to be some screwed up stuff happening. If a director wants to get fans off his back about remaking a beloved horror flick, this is the way to do it; give them a brutal bonbon like this new Nightmare.

Bayer had a good script from which to work. Writers Wesley Strick and Eric Heisserer bring more dark magic to Freddy Krueger, presenting new ideas about how Freddy can stalk and kill even when his victims are not sleeping.

Ultimately, what really sells this movie is the young cast playing the teens. Maybe no one told them that the Screen Actors Guild is unlikely to hand out an “Outstanding Performance by a Cast in a Motion Picture” nomination (let alone a win) to the cast of a horror movie. As an ensemble, however, I believe they were as earnest and as hard working for Bayer as they would be for Martin Scorsese. This is the art of the convincing performance.

, but this suspenseful, blood-freezing treat is the real deal in horror flicks.