Ridley Scott Delivered Another Great Film in "Black Hawk Down" 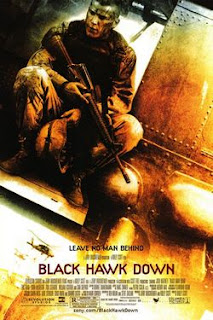 On October 3, 1993, just over 100 American Delta units and Ranger infantrymen were dropped by helicopter into the city of Mogadishu, Somalia to abduct two of Somali warlord Mohamed Farrah Aidid’s lieutenants. Aidid had been stealing food provided by relief agencies for the Somalis; Somalia was suffering through a devastating famine, and images of the dead and dying filled the American television screens. By stealing the food, Aidid was using starvation to make his rivals submit to him.

The mission to capture his aides was only supposed to last an hour. However, a firefight between American military and Aidid’s forces led to the downing of two UH-60 Black Hawk helicopters, and that was the start of a prolonged and bloody fight. When the last American finally reached safety, the mission had lasted 15 hours. Nineteen Americans were killed and 73 wounded, and hundreds of Somalis were dead.

Directed by Ridley Scott (Blade Runner, Gladiator, Hannibal), Black Hawk Down focuses on the efforts of the Rangers and Delta forces to rescue the men of the downed helicopters. The story follows different groups of American servicemen. In two of the stories Staff Sgt. Matt Eversmann (Josh Hartnett) and his Rangers engage Aidid’s forces in prolonged street fighting, and Lt. Colonel Danny McKnight (Tom Sizemore) leads a group of rescuers that gets lost in the maze of Mogadishu’s streets, where Somali gunmen and snipers rain gunfire upon the Americans.

Black Hawk Down is some of the best work Scott has ever done. While it shares the intensity of Saving Private Ryan

, in particularly the hair-raising reenactment of D-Day landings on Normandy beach, much of Black Hawk’s impact comes from its dramatic structure, which emphasizes character and story. In addition to Sgt. Eversmann and Lt. Colonel McKnight’s group, the film also follows the plight of the only survivor of the second downed Black Hawk, Chief Warrant Officer Durant (Ron Eldard), who was a prisoner of Aidid’s forces for a few weeks after The Battle of Mogadishu. Staff Sgt. Ed Yurek (Tom Guiry) leads his decimated Ranger group through gunfire to safety. Scott follows the beleaguered Americans, moving deftly from one group of servicemen to the other, keeping the intensity of the drama very high.

Though very violent and occasionally quite gory, Black Hawk Down is the story of these brave men and their struggle to not only survive, but to also rescue and to save the lives of their fellow soldiers. Beyond issues of patriotism and bravery is the strength of dedication and skill of these men. Scott’s war movie is a movie about the camaraderie of soldiers.

While Scott is at the top of his craft in this film, the acting is also of the highest quality. The cast is quite convincing in their roles as soldiers, and the Somali extras aren’t bad either. Tom Sizemore delivers his usually quality work in a supporting role, but the surprise here is Josh Hartnett. A pretty boy in the Tom Cruise tradition, Hartnett hit his stride in this performance. His concentration and intensity in delivering on his role as Sgt. Eversmann is fascinating to watch. If the film’s ideas and intentions must, in the final analysis, hang upon the shoulders of one soldier, Hartnett ably supports the story.

Black Hawk Down will rise above many other war films because it is something more – a war story, a soldier’s story, and a combatant’s story. One cannot help but be impressed by how the storytellers and the cast convince us that in the face of the greatest of dangers, these men will not stick to their credo “Leave no man behind,” be they dead or alive. Black Hawk Down is special.