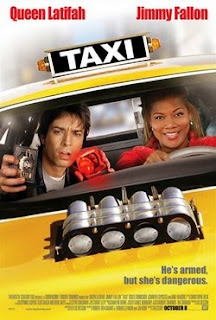 ACTION/COMEDY with elements of crime and a thriller

Belle (Queen Latifah), a mouthy and feisty New York City cab driver with a souped up cab, helps Washburn (Jimmy Fallon), an inept and green cop, solve a series of bank hold ups committed by a band of female Brazilian bank robbers, led by the sexy Vanessa (Gisele Bundchen), who is as good at driving at super high speeds through NYC traffic as Belle is.

The first scene of Taxi, an American version of the French series created by Luc Besson (creator of The Fifth Element

, who also produces this version), features a NYC bike messenger flying through and over the streets and landmarks of the city in a manner that would mark him as super human. It was like something out of a video game or a James Bond movie. When the biker reaches the office where he works, he slips off his helmet to reveal that he is Queen Latifah. A slim stunt rider can’t pass for someone as… pleasantly plumb as the Queen. But the Queen and her co-star, Jimmy Fallon, have it going on.

is a cheesy, thrill ride, a funny action comedy that has more laughs than it has moments that stretch belief, and it has lots of moments that cross over into fantasy. Still, the important thing in terms of entertainment is to make a funny movie. No, the cop/FBI angle, as it is in Taxi, wouldn’t work in the real world, but here it works to lots of laughs. And the car races and chase scenes may not be The Fast and the Furious, but they’re 2 Fast 2 Furious.

Queen Latifah and Fallon have great screen chemistry. You can really believe that her Belle hates Fallon’s Washburn, but there’s truth in both their characters. You can buy their characters and the progression of their relationship as the film progresses. It’s dumb, but funny. The Queen is a talented and funny screen comedienne, and Fallon’s shtick works here. He’s not the macho action star; he’s more sweet, charming and vulnerable, but what keeps him from being a chump is that his Washburn is perseveres. No matter what knocks him down, he’s subtly relentless and machine like in his quest to be an effective cop. You can respect this soft guy who is not so soft after all. He’s got grit and determination. So you may not have wanted to buy a ticket to see Taxi, but if you have a sense of humor, this thrilling, action-paced comedy is worth a rental.