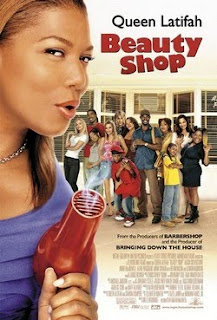 Gina Norris (Queen Latifah) is a long way off from Chicago where we last saw her in Barbershop 2: Back in Business

. She’s in Atlanta (Hot-lanta!) making her rep with the cutting-edge hairstyles she puts on the customers at a posh Atlanta salon. However, her flamboyant, egotistical boss, Jorge (Kevin Bacon), is jealous of her, and after one insult too many from him, Gina quits. She opens her on beauty shop, but right from the beginning, she has all the usual troubles that a small business has: not enough money, state regulations, unruly employees, etc. One of her old co-workers, shampoo girl, Lynn (Alicia Silverstone), and a few key clients, Terri (Andie MacDowell) and Joanne (Mena Suvari), follow her. Now, all she has to do is maintain her family obligations and keep her struggling business afloat. That should be easy, right? At least, there’s lot of laughter and friendship along the way.

Beauty Shop is a spin off, but by no means a sequel, to the Barbershop

films. This really is a women’s movie, and with its diverse cast of black and white actresses, as well as other persuasions, it’s a (grown up) girls’ movie with crossover appeal. The language is a bit blue, and the frank talk about sex is enough to make even a veteran of caustic movies like myself blanch. Still, I saw children buying tickets to see the film, and it does reach out to them. Gina has a daughter, a character to appeal to younger viewers, and frankly, girls want to hear women talk; besides, Beauty Shop’s subject matter isn’t prurient.

The plot is light, but deals with a familiar and appealing theme: the little guy taking on the evil big guy who wants to squeeze the little guy out of existence. Beauty Shop has lots of laughs, but it’s as much a drama as it is a comedy. Gina’s struggle to stay afloat is not only precarious, but has a hard ring of verisimilitude. Also, some of the confrontations between characters are filled with funny wisecracks, but also have a dark edge and tension to them.

This is also an ensemble picture, with Queen Latifah in the lead, a character-driven film that focuses on the players with the plot holding second place. Everyone plays her (or his) oddball well enough, although Alicia Silverstone’s Georgia cracker, Lynn, is a bit too much, as is Kevin Bacon’s ridiculous Jorge. The Queen is an underrated actress. She handles the topsy-turvy of the film’s comic/dramatic turns with dexterity that belies her size. She’s a beautiful movie star, and her radiance grows with each film. Without her, Beauty Shop would be another tired “urban” movie cliché full of mouthy, smack-talking ethnics. Luckily, she is in Beauty Shop, and she raises this sub-par material and takes her co-stars with her.