"Something New" is Quite Cool 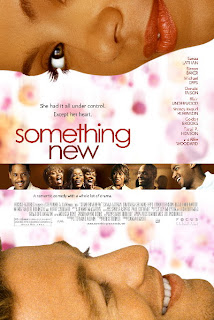 Kenya Denise McQueen (Sanaa Lathan) has carefully calculated her professional life, and the young African-American accounting executive is up for partner at the firm for which she works. Still, she’s concerned that her personal life doesn’t measure up to her professional success. She accepts a blind date coordinated by a colleague, but the blind date turns out to be a white man named Brian Kelly (Simon Baker). She brushes him off, but that’s not the last she hears from Brian. He also turns out to be the sexy, free-spirited landscape architect a friend recommends. A relationship develops between Kenya and Brian, but though he’s comfortable with her, she can’t get past the fact that he is a white man. She’s later meets the IBM, the Ideal Black Man, a tax attorney named Mark (Blair Underwood), and they seemingly hit it off. Although Mark seems like her dream come true, Kenya’s heart might be somewhere else – regardless of what her friends, family, and the rest of society have to say.

Something New is the latest film about interracial (an absurd term) dating. The best-known recent examples include Spike Lee’s infamous Jungle Fever

and the Julia Stiles hit, Save the Last Dance

. Something New is not as incendiary as the former, nor does it have the youthful passion of the latter. The film by director Sanaa Hamri and writer Kriss Turner (a TV scribe whose credits include “Whoopi” and “Everybody Hates Chris”) is rather tame, but gets its energy from a willing cast. We know what the film is supposed to be about – unexpected love, but we know what this film is really about – a black girl dating a white guy. The actors grapple with that, and all they have to work with is Turner’s screenplay, which doesn’t know if it’s a love story or a lesson planner. Everything seems a little too loose, in a subject matter that demands structure (although I may be wrong) Still, what Turner’s script and Hamri’s directing offer would be enough to make this a good film. The actors make Something New a little better than just “good.”

One really impressive thing about this is that it showcases so many talented Black actors, whom we’d normally not see, at least not more than once a year. Alfre Woodard is fantastic as Kenya’s mother, Joyce McQueen, and one can only assume that being a Black actress has more often than not been an impediment to her career. Here, she shines as a woman madly wedded to her social status and to the idea that her children should live up to it – or so it seems. Wendy Raquel Robinson is equally good as the friend/voice of reason, Cheryl.

Leads Sanaa Lathan and Simon Baker do have screen chemistry, mostly because they play their characters so well, knowing exactly what to give their characters respective to the needs of the story. It’s their performances, in particularly Sanaa Lathan’s that gives this film its juice. Lathan practically emanates career obsession and embodies the hard-working, professional black woman tightly holding it together in all the ways it takes to climb the corporate ladder. At times, it is uncanny how true she makes Kenya’s reactions to people and situations. Her acting in the Starbucks’ scene when Kenya first meets Brian is uncommonly good – the art of verisimilitude with an attention to detail that gives this scene a documentary feel. It’s everything she does. Kenya’s vainly subtle ticks when she’s in public with Brian seem like painful compromises with strangers so that they won’t sneer at her for being with a white man. Those things that Lathan does make this a genuinely moving picture.

Baker is perfect as the laid-back, free spirit who just won’t hide his disdain for social hang-ups. In the end, he tips the balance and makes this movie seem, if not quite real, honest in its intentions. Something New makes its points in a gentle way while offering several entertaining supporting characters and then occasionally gives the viewer a hard nudge thanks to fine situational acting. Something New is the good choice for those wishing to either make that leap to the other side or just see how cool things could be if we all just got along… or at least the few of us who get along no matter what the hell the others have to say

Posted by Leroy Douresseaux at 9:33 AM