Sandra Bullock Shines in Winning "The Blind Side" 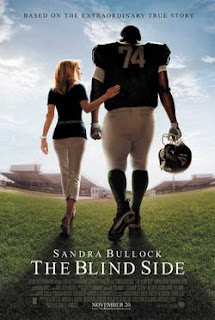 Michael Oher is a professional football player for the Baltimore Ravens of the National Football League (NFL), and he was also a college All-American at Ole Miss. Oher spent much of his youth living in foster homes or being homeless. During his high school years, Leigh Anne and Sean Tuohy, a couple with a daughter and a son at Oher’s school, took Oher into their home and eventually adopted him. Oher’s story became a book by Michael Lewis, The Blind Side: Evolution of a Game

, which was adapted into the 2009 Best Picture nominee, The Blind Side. This film will likely be remembered as the movie for which Sandra Bullock won her “Best Actress” Oscar.

Michael Oher (Quinton Aaron) is a homeless African-American youngster who has lived with different foster families. The father of one of his friends gets Oher enrolled in an exclusive Christian school. There, Michael, called “Big Mike,” befriends a younger boy named Sean Tuohy, Jr. or SJ (Jae Head). SJ’s mother, Leigh Anne Tuohy (Sandra Bullock), a fiery interior designer, takes notice of Michael with her son. After a pre-holiday Thanksgiving school event, Leigh Anne sees Michael walking in the rain and offers to let him spend the night at her home. That leads to Michael spending Thanksgiving with Leigh Anne, her husband, Sean Tuohy (Tim McGraw), her daughter, Collins (Lily Collins), and SJ.

Michael begins to thrive in his new environment with the Tuohys, and his presence leads the Tuohys to some insightful self-discoveries of their own. However, this new life offers a new set of challenges for Michael. Leigh Anne also decides to make her and Sean Michael’s legal guardians, but that means delving into Michael’s troubled past. Suddenly Leigh Anne, her family, and their latest addition, Michael, find road blocks on the way to their happy ending.

I imagine that most viewers will feel very good after watching The Blind Side. This movie is the real deal because it is more than just another heartwarming story about Black people and White people coming together. Writer/director John Lee Hancock makes The Blind Side different from most inspirational sports drama by actually not contriving phony explanations for why the characters make the peculiar and surprising choices they do in relating to other people. He simply dazzles us with the Tuohys’ stunning generosity and the spirit of Christianity displayed by many of the characters. We don’t have to ask why they do it, but accept on faith that they are doing it for the right reasons.

As the spitfire Leigh Anne Tuohy, Sandra Bullock is certainly deserving of her Academy Award. Bullock not only embodies the fierce stubbornness of a modern Southern woman; she also personifies the inscrutable nature of humans. Sandra allows us to see Leigh Anne’s care and concern for Michael’s well-being and future, as well as her don’t-stand-in-my-way attitude, but shuts us out of what really goes on in Leigh Anne’s head. In reality, neither Bullock nor the audience knows why the real or fictional Leigh Anne does what she does, but in this movie that is not important. We’re supposed to be blind sided by people’s actions, especially Leigh Anne’s, because we don’t see them coming, as Leigh Anne is blind sided by her own feelings for Michael.

While much is made of Bullock’s performance (and rightfully so), Quinton Aaron gives a calm, but powerful performance as Michael Oher. In his quiet way, Aaron actually makes “Big Mike” that much more interesting, attracting the viewer to the character. Every time Aaron is on screen, he has the viewer trying to dig into Oher. As SJ, young Jae Head is a lovable scene-stealer, and the young actor makes SJ solidly the third most interesting character after Leigh Anne and Michael Oher. Consider him the adorable extra in The Blind Side, one of the great sports movies and fine family drama.

Posted by Leroy Douresseaux at 7:24 AM