Review: "Shrek Forever After" is an Upgrade from Third Film 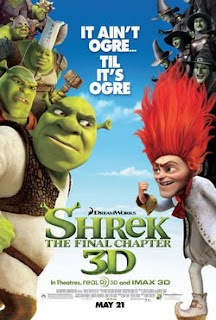 The magic is not gone! Shrek Forever After arrives in theatres and reminds us that the disappointing Shrek the Third was a fluke in the Shrek franchise. When Shrek debuted in 2001, it was certainly different from the typical animated film. Instead of being an update of some fairy tale meant to appease children, Shrek turned the fairy tale on its ear, spoofed pop culture, and introduced odd ball characters that were so endearing a few of them gradually became pop culture stars. The 2004 sequel, Shrek 2, was as good as the first film, but not as fresh and original. Shrek the Third was a misfire. While it may not be an original, Shrek Forever After returns to what the first two films did well.

The new film finds the title character, that lovable ogre, Shrek (Mike Myers), not loving being a lovable ogre. He fought an evil dragon to rescue Prince Fiona (Cameron Diaz), married her, and saved his in-laws’ kingdom, Far Far Away. Before that, however, Shrek was ogre who scared villagers and took mud baths. Now, he is a domesticated family man, changing diapers, and autographing pitchforks for admiring villagers, and his once-fearsome ogre’s roar has become a children’s favorite. Shrek longs for the days when he was “real ogre,” but there is someone with the magic to help him be bad again.

A smooth-talking dealmaker named Rumpelstiltskin (Walt Dohrn) meets Shrek and offers him a magical contract. Shrek can get a day to feel like a real ogre again, in exchange for ANY day from Shrek’s past. Shrek signs the contract, but the deal creates a twisted, alternate version of Far Far Away. This is a world in which he and Princess Fiona never met, and his friends, even Donkey (Eddie Murphy), don’t know him. He has 24 hours to restore his world or disappear forever.

Shrek Forever After is essentially a spin on director Frank Capra’s It’s a Wonderful Life, in which a man on the verge of suicide gets to see how unfortunate life would be for his family, friends, and community without him. Because it uses themes similar to the Capra film, this fourth Shrek movie is probably the most heartfelt and sentimental about the importance of close relationships. The narrative is insistent that each individual character is essential to the well-being and happiness of his or her fellow characters. [That said, Puss in Boots (Antonio Banderas) is getting a spin-off film.]

The entire story plays off the idea that the audience, by now, is familiar with these characters, knows their personalities, and has expectations about how the characters will entertain them. And Shrek Forever After delivers. All the voice performances are good, and, unlike in Shrek the Third, Eddie Murphy and Donkey have lots of screen time, which they use to spectacular results. This film also introduces another good Shrek villain, the winning Rumpelstiltskin, superbly performed by animator and voice actor, Walt Dohrn.

Shrek Forever After like the original is big and jolly. Cleverly chosen songs still populate the soundtrack and set the tone for key scenes in the story. Pop culture is slyly referenced and spoofed (like the funny break dancing witches routine), and the main characters still have some of the best jokes and one-liners the audience will hear during the summer movie season. But Shrek Forever After has heart. If this is indeed the last Shrek film (at least for awhile), we are left with a movie that reminds us how much fun Shrek and company are and how much we really like them or even love them.