Review: Eddie Murphy Made the Excellent "Shrek" Even Better 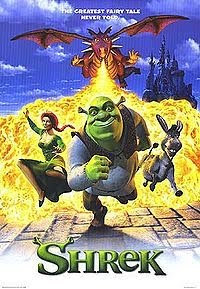 Shrek (Michael Myers), a reclusive ogre, suddenly finds his home in the swamp beset by the denizens of hundreds of fairy tales. They are refugees of a hate campaign by a little despot named Lord Farquaad of Duloc (John Lithgow). Farquaad promises to remove the fairy tale beings from his home if Shrek rescues Princess Fiona (Cameron Diaz) from a fearful fire-breathing dragon. By marrying a princess, Farquaad would become a king. The talkative Donkey (Eddie Murphy) joins Shrek as his faithful steed on the quest to rescue the princess for Farquaad, but love has other plans.

, Shrek is a lively and funny cartoon that kids can watch but that is really aimed at adult viewers. With the requisite toys and novelties, the film is sure to attract children, and the film contains enough gross and childish humor to keep their attentions. Shrek’s success, however, is in its ability to tap into grown-up sensibilities. Literally having a pack of writers working on the script gives Shrek’s story multiple layers. The movie is filled with pop culture references, film references, bawdy humor, sight gags, and sly asides, and the romantic and sentimental aspects of the film are quite convincing.

The voice actors really carry the movie. Myers is, as always, able to create several character voices, and he creates two others in this film besides Shrek: the Narrator and one of the Three Blind Mice. Ms. Diaz has a nice performance as the princess, but she saves her best work for the film’s last quarter. John Lithgow, an accomplished actor who has played a few wacky villains in the last decade, revealed his comic chops in the television series “Third Rock from the Sun.” He doesn’t fail to please here; his Farquaad is nasty, petty, deceitful, and quite vindictive – a potent little menace who really deserves his comeuppance.

The star of the show, however, is Eddie Murphy as Donkey. We’ve come to take Murphy for granted. He hasn’t taken on oh-so-serious roles like other comedians, so many critics and moviegoers don’t think of him as a good actor. His Donkey is a jiving talking huckster, at one moment cowardly, brash the next, and a mentor when he has to be. The role fits Murphy like an old glove, but he makes Donkey so vital, so fresh, so funny. Like one of Robin Williams’s caricatures, Murphy is a chatterbox, but he doesn’t wear thin; even his mumblings are funny. His verbosity never annoys, and Donkey is the axis upon which this story turns. Lose him and you have a passable, middling movie.

Shrek is a surprise, and it went on to win the first Oscar® for Best Animated Feature. It is truly for all ages. Funny and touching, it is Hollywood product that is near perfect entertainment – well put together by its cast and creators.