Review: "Alamo Bay" is Powerful, But is Also Too Angry 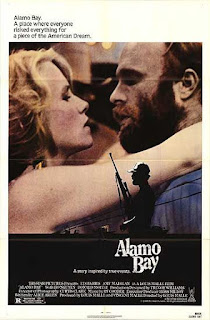 When filmmakers tackle difficult subjects, especially subjects dealing with social and class conflict, they often produce films that fail financially or that get lost in the shuffle of the movie making industry. Louis Malle’s (Atlantic City) film, Alamo Bay, is just such a movie. It’s about a clash of two cultures and two different ethnic groups. When one doesn’t understand the other, when one feels threatened by the other, and when has no regard for or cannot understand the other, the result is violent confrontation. This conflict may seem to have an easy solution - a coming together of the two groups to talk through their differences, but the process to joining hands is long, strained, difficult, painful, and often unlikely. The film reflects the absence of an easy solution, so it can be painful to watch.

Shang (Ed Harris, The Right Stuff) is a Vietnam veteran despondent over loosing his livelihood as a shrimp fisherman when he cannot meet his boat payments. He and his fellow townsmen clash with the newly arrived refugees from Vietnam who move to their (fictional) town of Alamo Bay. The Vietnamese immigrants work harder and labor longer hours to catch shrimp. Shang and his cohorts see this as undercutting them. His old girlfriend, Glory (Amy Madigan, Places in the Heart), returns to Alamo Bay further complicates his life, as does her friendship with a newly arrived young immigrant, Dihn (Ho Nguyen).

Malle and screenwriter Alice Arlen don’t spare us the nasty words, ugly confrontations, and brutal bigotry the white townspeople unleash against the immigrants. What the movie sorely lacks is better view of the Vietnamese townsfolk – their feelings, their grudges, and their ethics. Very few of Vietnamese characters speak English in the film, and the Vietnamese dialogue in the film does not come with English subtitles. That does help to create a sense of the immigrants as the other, as well as convey the sense that they have a difficult time communicating with their hostile new neighbors who really don’t want to talk to them. Still, the film felt like it needed more interplay from the new arrivals, because as the film is, it’s mostly about whitey’s anger.

The entire cast is very good. They absorbed their characters without overplaying them. They seemed up to the task, but many of townsfolk were left with little room to maneuver outside of being cardboard bigots or victims. Madigan’s character has dimension, but she spends a lot of time crying and pining over her lost love with Chang and whining in general. Harris is the true star of this film; he passionately takes on his part, and in his eyes, the audience can read a novel’s worth of history and information on this man. Sadly, except for a few snippets, all we get is the angry bigot.

This film is built on anger, and although it gets the emotions and feelings correct, the story itself acts like an outsider, as if it just walked in on the bad situation in the town. It claims to be inspired by real events, but it only snatches up bit and pieces of the whole story. Powerful and visceral, it’s a noble attempt, but it could have been so much more.