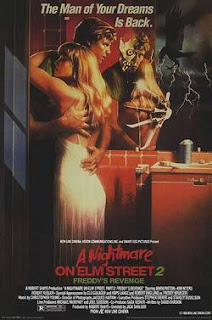 With Freddy Krueger, the boogeyman of the A Nightmare on Elm Street films, set to arise again in the upcoming Freddy Vs. Jason

, I thought I should see one of the two “Elm Street” films that I hadn’t seen, A Nightmare on Elm Street 2: Freddy’s Revenge. In this the first of many sequels, Jesse Walsh (Mark Patton) and his family move into the home that Freddy’s (Robert Englund) evil spirit haunted in the original film. Freddy’s uses Jesse’s body as his new conduit into the real world where he can get at a fresh batch of Elm Street teens. You see it was the parents of those Elm Street kiddies who, in an act of vigilante justice, murdered Krueger, a child killer who’d evaded the law. Years later, Freddy, the embodiment of evil, comes back as a malevolent spirit who haunts the dreams of his murderers’ offspring and kills them in their sleep.

Freddy’s Revenge isn’t so much an entire movie as it is part of a movie. As an entry in a long running series, it’s barely a chapter. The movie begins with a lot of poorly constructed setup. It’s boring because we don’t need to know the history of Elm Street. The audience knows Freddy will come; drop the bull and bring on the bad guy. Instead, we get a lot of scenes of Jesse having difficulty adjusting to school and to life as a teen, although he does have a girlfriend. Jesse’s role as a teenage misfit is mostly boring, and I couldn’t care less about the rest of the cretins who populate his high school world. The show doesn’t really start jumping until you-know-who shows up, but by the time Freddy really busts out, the movie is about over.

Clearly the writer and the director of Freddy’s Revenge didn’t have a grasp of the character like original writer/director and Freddy creator Wes Craven did. They did keep Freddy carefully cloaked in the inky darkness of night, his face mostly hidden in shadows, a creepy and convincing bogeyman (gleefully played by Englund), but they didn’t let Freddy run amuck enough. The great thing about the original was that Freddy really got to let loose. He was a truly frightening monster, especially when we couldn’t see him, but we knew he was there. There are some interesting moments here, mostly to do with Freddy. I must say that this film isn’t as bad as I expected it to be, but it’s really a clunky film. It’s feels like what it is – a sequel the studio rushed out to catch some of the good buzz left over from the first film. It’s cynical, cheap, and sad, because if they’d taken their time, the filmmakers had enough good ideas to at least make a really good scary movie.

Posted by Leroy Douresseaux at 7:52 PM